FCCC President and CEO Jim Corcoran gives the 400-plus crowd remarks about the move. 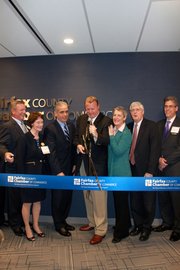 Chamber board members and elected officials at the ribbon-cutting ceremony.

Chamber board members and elected officials at the ribbon-cutting ceremony.

More than 400 people braved the flooding Potomac and heavy traffic due to severe thunderstorms to celebrate the Chamber’s Open House and ribbon cutting in Tysons Corner on Wednesday.

“Our tagline is that we’re the voice of business in Northern Virginia, so we wanted to have an appropriate facility,” said FCCC President and CEO Jim Corcoran. “I really think, with this space, I would be proud to bring anyone from any organization to host an event.”

The previous location on Old Courthouse Road could only host events with less than 100 people without breaking the building’s fire code. The new location at 7900 Westpark Drive can host hundreds more in their events space. The networking space in the office has windows that span an entire wall with a view of the beltway and three Fortune 500 Companies.

“We were squeezing events in there,” he said.

Corcoran said the chamber represents about 650-plus organizations who have nearly 500,000 employees. They will no longer need to rent nearby country clubs or other large event locations - therefore spending more money - to host their events.

“It was a good team effort,” said Rowley.

Current FCC board chairman Mark Moore was also excited about the new location. He has been a member of the chamber for 25 years.

“It’s outstanding,” he said. “It puts us in the center of the action in Northern Virginia.”

He said the process of finding a new space for the chamber took about a year, but he is pleased with how it turned out. With the networking space, breakout rooms, conference area and office space, he said the decision was a good financial move.

“We’re all very excited about it,” he said.

Silver Spoon Catering owner Audrey Lustre was the event’s food sponsor. Her business put together mountains of fruit, cheese, sandwiches and dessert to feed the 500-plus people expected to attend the event before the deluge washed away motivation for some to come. During Corcoran’s speech, he gave her an elaborate bouquet for paying for the night’s hors d'oeuvres.

“It’s a major, major improvement from what they had,” Lustre said. “It’s also good exposure for them because of the location. I think it’ll give members security that the chamber will be some help for them.”