Farmers Come Back to Lake Anne 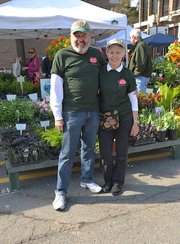 Your co-hosts and Co-Market Masters John and Fran Lovaas welcome you to Opening Day of the Reston Farmers Market’s 17th season at Lake Anne. 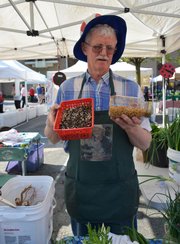 Mike McCormick of Ladybug Mountain Farm in [“We don’t think of ourselves as ‘Little’”] Washington, Va. offers wheatberry to sprout for yourselves. “Should be able to mow them pretty soon after planting,” says McCormick.

It’s oysters for breakfast for Liz Schiavone of Herndon, freshly shucked by Matt and McKaylah Corbin of Arnest Seafood. “Yum!” was Schiavone’s comment.

Taking “fresh from farm to table to a new level.” The Diehl family of Reston - Tiffany, Clinton and 9 year-old Ryan - purchase a still growing lettuce bowl from Virginia Vistas of Berryville.

The Open Air Market in the Lake Anne Plaza is also open for business. Featuring artisans, global imports and health products like the many “Beehive Remedy” offerings of InterNutrionals, LLC of Oakton. Michele Bucharnikov had her hands full with customers a plenty.

Raquel, 11, and Ethan Chaupiz, 12, welcome shoppers at their ArtByKidsForKids booth situated just at the edge of the Reston Farmers Market and the beginning of the Lake Anne Open Air Market. With support from manager Fred Hanna, the youngsters sell colorful, creative and even educational original artwork. 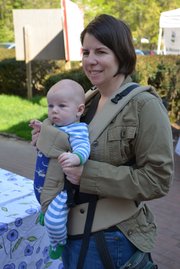 “We go to the Falls Church farmers market in the winter, but we can’t wait until Spring and the Reston market to get here,” said Heather Neumeyer. At the Opening Day of the 2014 market, Neumeyer introduces 5 month-old Grayson to the joys and wonders of shopping in a village atmosphere.

They’re back! And judging by the crowds wandering the stalls at the Reston Famers Market (RFM) at Lake Anne on Saturday, May 3, quite a lot of folks could barely wait. “There are other markets open during the winter, but this is the one we really enjoy,” said Sue Anne Miller of Burke, who arrived just after things got under way at 8 a.m. “Bringing the family to Opening Day is like the official start to Spring for us,” said Miller, juggling her coffee cup, a yummy from vendor Grace’s Pastries and a handful of reuseable shopping bags.

John and Fran Lovaas are your Co-Market Masters, expertly handling the logistics of the day. The Lovaas’ are proud of their association with the RFM. John was recruited to run the event from Day 1. “True story,” said John. “The “Friends of TOMATO” (Organic Market at Tall Oaks in Reston) got pushed out by the grocery store there and were looking for someplace to hold a farmers market. They contacted the Reston Association Board for help (John Lovaas was a RA Board member at the time) and Lake Anne was suggested as a great spot.” Then the TOMATO folks asked for some seed money and for someone to run the market. “Somehow, that ‘someone’ was me,” laughed John. “Eventually we dragged Fran into the Farmers Market business, and the rest is history.”

STARTING WITH JUST TWELVE VENDORS, over the years the market has become such a successful venue that 27 of the 28 vendors from last year’s season are back for 2014 and the market was named the “Best Market in Northern Virginia for 2013” by Virginia Living Magazine. About 25 percent of the vendors are “originals,” bringing their home-grown wares to the RFM since the first market was held 17 years ago. “That’s a pretty good retention rate,” noted John Lovaas. “And we are really fortunate to welcome Smith Meadows Farm of Berryville to the fold this year.”

Like many of the vendors, Smith Meadows produces all grass-fed, humanely handled cattle, pigs, goats, sheep and chickens that are never fed animal by-products or given growth hormones or antibiotics. Their pastures are not chemically fertilized or treated with pesticides or herbicides. The result, according to farmer and acclaimed author Forrest Pritchard, is healthy, leaner meats with beta-carotene, Omega-3 fatty acids, CLA and even the anti-oxidant Vitamin E, derived from the fresh pastures. At the Opening Day Market, Nancy Polo, owner, manager and chef at Smith Meadows Farm Kitchen, was on hand to tell the farm’s story and to sell their products, including her own organic pastas and pastries.

The RFM is also pleased to announce that the Supplemental Nutrition Assistance Program (SNAP) will be offered at this year’s market. “Great news,” said John Lovaas. “Big thanks to the Park Authority and the folks at Cornerstones (formerly Reston Interfaith) for bringing SNAP.” Cornerstones will administer the program for the market.

WHILE BROWSING, MIXING AND MINGLING, market-goers are also treated to entertainment. The Split String Soup Band was scheduled as the Opening Day bluegrass musical treat. Clutching goodies of fresh produce, pastries and bags of Colonial Kettle Corn, many of the RFM shoppers wandered deeper into Lake Anne territory to check out the artisans at the Reston Open Air Market, organized by Friends of Lake Anne. A natural companion of the RFM, and solidifying the “village market” atmosphere, the Open Air fair showcases dozens of crafters and importers of goods from around the globe, as well as highlighting the resident merchants, restaurants and service providers and Reston’s “First Village” community.

Lots more entertainment is planned for the months ahead for both the Reston Farmers Market and the Lake Anne Open Air Market, so come as often as you can, bring the whole family, and a lot of those shopping bags for a day out with friends, neighbors, fun, interesting gift items and good healthy food. The Reston Farmers Market has a website at www.restonsfarmersmarket.com, and a Facebook page, as well for more information.