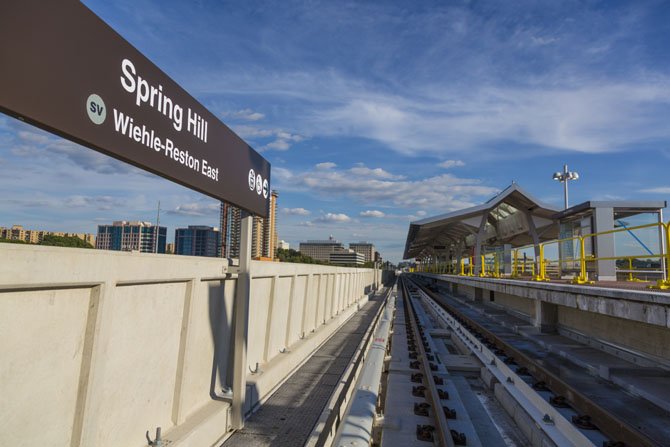 Spring Hill Station: The Metropolitan Washington Airports Authority has announced the substantial completion of the Phase 1 of the Silver Line Project.

Wiehle Avenue Station: The Silver Line is a 23-mile addition to the Metrorail system.

"Achieving substantial completion is a significant milestone," said Airports Authority President and CEO Jack Potter. "We have conducted a thorough review of the contractor's submission and are satisfied that Phase 1 has met the contractual requirements that will allow the project to now move to the next steps in the process to begin passenger service. We appreciate the close cooperation among WMATA and our partners in moving this large and complex project forward."

Phase 1 of the Silver Line project is an 11.7-mile segment with five stations serving McLean, Tysons Corner and Reston in Northern Virginia, which are among the fastest-growing communities in the National Capital region. The Airports Authority is managing construction of the project.

The next step in the process toward passenger service is WMATA's decision to take over the Phase 1 project so it can conduct its own inspections, testing, and training. While WMATA is performing these activities, additional reviews of the project will be undertaken by the U.S. Department of Transportation's Federal Transit Administration and the regional Tri-State Oversight Committee. Following those reviews, WMATA will be in a position to formally accept the Phase 1 project and commence passenger service.

Phase 1 of the Silver Line connects to Metrorail's Orange Line in Falls Church, and runs to the eastern edge of Reston, with four stops in Tysons Corner. Work also has begun on Phase 2 of the project, which will connect the Metrorail system with Dulles International Airport and points in Loudoun County.