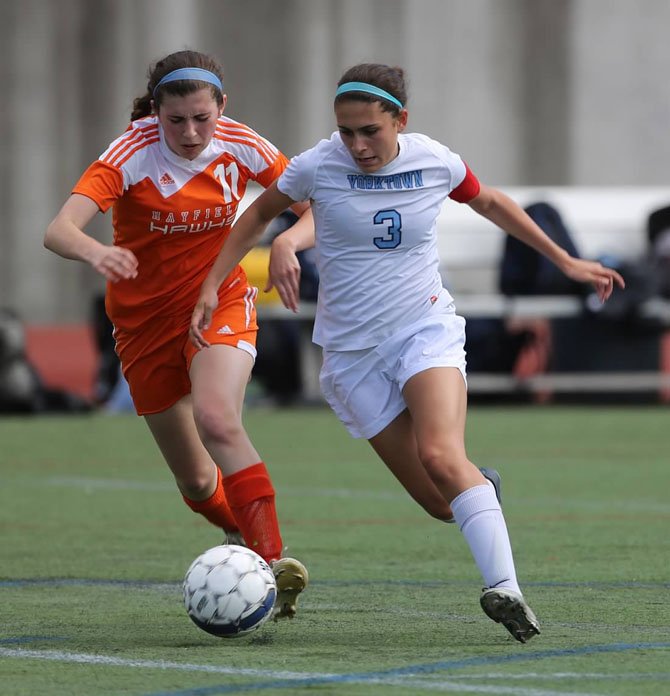 Senior midfielder/forward Alex Puletti, right, scored one of the Yorktown girls’ soccer team’s seven first-half goals during an 8-0 win over Hayfield on May 16. Photo by Greg Denkler

The Yorktown girls’ soccer team on May 16 took a step toward returning to the region championship game, and did so in dominant fashion.

The top-seeded Patriots secured a berth in the 6A North region tournament with an 8-0 victory over No. 8 Hayfield in the Conference 6 tournament quarterfinals at Greenbrier Stadium. Yorktown scored seven goals in the first half and improved its record to 12-2. The Patriots advanced to the conference semifinals, where they defeated No. 4 Madison 4-1 on Tuesday. Yorktown will host No. 2 Washington-Lee in the conference championship game at 5:30 p.m. on Thursday, May 22.

Last season, Yorktown qualified for the state tournament by reaching the region championship game, where the Patriots lost to Chantilly. This year’s team has its sights set on getting back to the region final and, this time, bringing home a championship.

“This season, we have a lot of returners, so the majority of the team experienced how great it felt to get to that point and also how awful it felt to lose after getting that far,” senior Alex Puletti said. “We all kind of had that in the back of our minds as a goal because we didn’t get it last year and I think the new players are feeding off of that and getting excited. It’s definitely one of our biggest goals.”

After years of dominating against the National District, competing in the Conference 6 tournament following the VHSL’s six-class re-alignment figured to give Yorktown more of a challenge. However, any potential increase in difficulty didn’t come from Hayfield, which competed against the Patriots in the National District from 2010-13. Yorktown senior Rachel Logue scored the first goal of the match in the seventh minute and the Patriots continued pouring it on. Five different Patriots scored at least one goal in the first half en route to a 7-0 halftime advantage. Kiely Westhoff scored the lone goal of the second half and the game was called after 60 minutes.

Westhoff, a freshman who suffered a knee injury during tryouts and returned to action April 21 against Oakton, finished with three goals against Hayfield.

“She was hurt at the beginning of the season, so she’s just sort of getting on the field a lot,” senior Emma Shumway said about Westhoff. “She’s definitely looking really promising as a freshman. A hat trick is impressive …”

“Since she’s stepped onto the field, she’s been an impact player. For a freshman, that’s really great for her,” Brunt said. “We’ve been working on her, getting her stamina and her fitness back up. She’s consistent in front of the goal. If she gets three looks, maybe even two looks, in front of the goal, she’s going to score one of them. That’s a pretty good strike ratio. She just stays composed and has great technique in front of the goal.”

Shumway finished with two goals against the Hawks. Logue, Puletti, and senior Kendall Logan each scored one.