Honoring the County’s Devotion to Animals 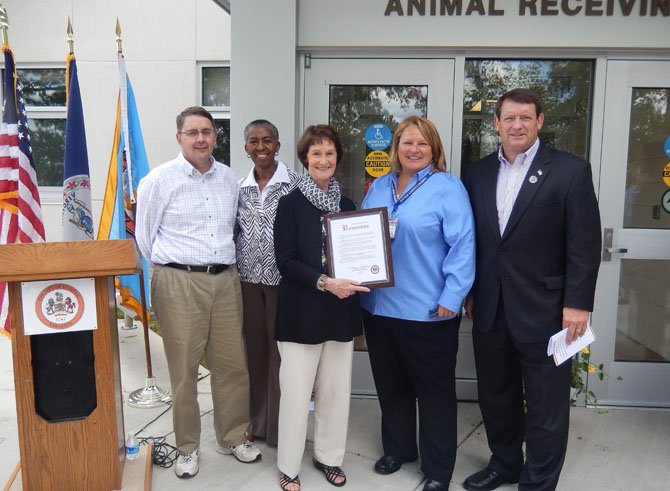 Residents, politicians and even four-footed alumni flocked to the Fairfax County Animal Shelter on Saturday, May 17, to celebrate completion of its renovation and expansion. It was a long time in coming, so it made the event even sweeter.

Bulova then presented a resolution from the Supervisors congratulating the shelter on its work. It also recognized that the shelter received the 2014 Compassion Award from the Virginia Federation of Humane Societies for its lifesaving efforts.

Supervisor Pat Herrity (R-Springfield) said it’s “not just about the animals – it’s about the volunteers, animal wardens and staff, too.” He also acknowledged the efforts of county Planning Commission Chairman Pete Murphy “who was involved in this project early and worked hard to get the funding in the CIP [Capital Improvement Program].”

He said a National War Dogs monument, dedicated to military dogs, will be located at this shelter. Frey also said the marker in the dog-walking area – previously dedicated to the late Susan Hall – “a veterinarian who gave an incredible amount of time to the shelter and worked hard to get the animal runs here” – would be rededicated.

DEPUTY COUNTY EXECUTIVE (and former county Police Chief) Dave Rohrer recalled when Animal Control and the animal shelter came under the Police Department’s control. And he remembered how former Shelter Director Karen Diviney kept telling him about the shelter’s cramped conditions and need for expansion.