Murder Is Charged in Stabbing
Votes

Murder Is Charged in Stabbing 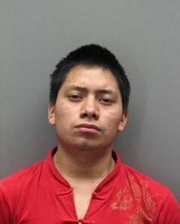 A 20-year-old Centreville man died Sunday, May 18, after being stabbed the previous night during a fight. Fairfax County police identified him as Domingo Eduardo Santiago Cuchil of no fixed address in Centreville.

On Wednesday, May 21, police identified Sebastian Velasco Santiago, 20, of Golden Oak Road in Centreville as his alleged killer. They charged Santiago with murder, and he’s now being held without bond in the Adult Detention Center.

Police responded to The Meadows community of Centreville on Saturday, May 17, around 11 p.m., after receiving a report of an assault with a weapon in the 14400 block of Golden Oak Road. Upon arrival, they found a wounded man, Cuchil, lying on the sidewalk.

After calling for Fire and Rescue personnel, officers were notified about another possible wounded man at a nearby home in the 14400 block of Cool Oak Lane. This victim was identified as a 31-year-old Centreville resident. He suffered non-life-threatening injuries and was treated at a local hospital and released. Police are not revealing his identity, and police spokeswoman Lucy Caldwell said Wednesday that no arrest has been made in connection with his assault.

Police say investigation determined that all the men knew each other and were neighborhood acquaintances. Detectives believe there was an altercation involving unknown assailant(s), but they’re still gathering further details regarding the reason for the fight.

Cuchil was pronounced dead Sunday at Inova Fairfax Hospital. Caldwell said information produced during the homicide investigation let police to develop Santiago as a suspect. He was scheduled to be arraigned in court Thursday morning, May 22.