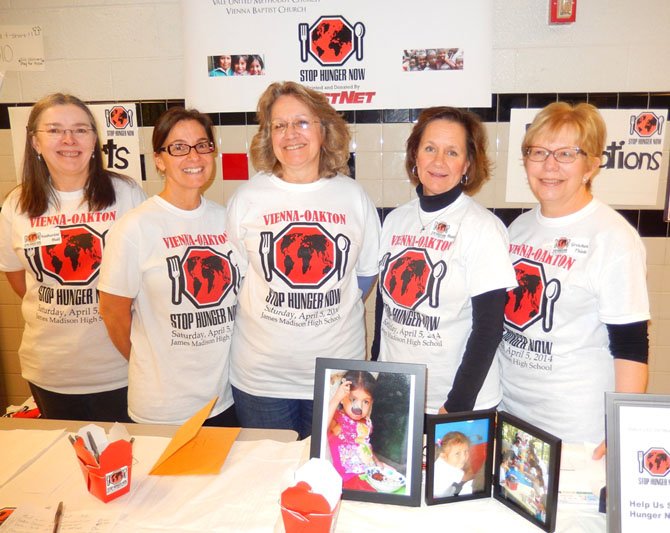 When members of a community join together for a common purpose, there’s virtually no limit to what they can accomplish. And when residents from throughout Vienna and Oakton gathered to package meals for the world’s hungriest people, they definitely made an impact.

“Our goal is to package 250,000 meals,” said Sue Hamblen, director of missions with Vienna Presbyterian Church. “They’ll go wherever they’re needed most, mainly to schools and orphanages.” And in this case, the food was sent to Nicaragua. 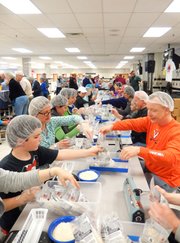 Volunteers weighing rice packets and sealing up the meal packages.

That’s why, on a recent Saturday, Madison High’s cafeteria was filled with people of all ages working in a production-line arrangement to package meals for the international, hunger-relief organization, Stop Hunger Now. Some 1,507 people registered to help, but a couple dozen walk-ins also joined the effort.

They worked in four shifts of 350 volunteers each and, said Hamblen, “This is a coalition of 10 sponsoring Vienna-Oakton churches, plus representatives from 20 total Vienna-Oakton churches participating. And it’s Vienna Presbyterian’s and Emmanuel Lutheran Church’s fourth year of doing it.”

THE EVENT was advertised through the churches, but also helping out were local Boy Scout and Girl Scout troops and members of the Vienna Rotary Club and Vienna Business Assn. Participating, as well, were students from Madison High’s Honor Society, Oakton High’s tennis team and 250 students and teachers from Waples Mill Elementary.

“To purchase the meals, the community raised $62,500 over a couple months,” said Hamblen. “A lot came from the churches, and even individuals contributed on their own. Some checks were as high as $1,500; people donated whatever they could.”

“Each meal contains rice, soy protein, dehydrated vegetables – tomato, onion, bell pepper and celery, and a vitamin sachet with 21 different vitamins and minerals,” said Millman. “The vitamin sachets are provided by Heinz, which helped design them specifically for malnourished children. These meals have the most nourishing combination of foods because they’re vegetarian and packed full of protein – and many mothers and children are protein-deficient.”

Regarding this local, packaging event, she said, “I think it’s awesome because it brings together lots of groups from the Vienna-Oakton community. And it’s so cool to see students, teachers, community and church members and Scouts working alongside each other.”

In the cafeteria, the volunteers received instructions and then people at each, long table either measured the food going into each meal package and filled the bags, weighed each meal, sealed the bags or packed them into boxes.

“Everyone seems happy; they’re smiling and having a good time,” said Millman. “Each person has one, simple job to do; and when everyone does it, it makes such a big impact.”

Hamblen said people were also enjoying the fellowship of working with many, different faith denominations within the community. “Collectively, the faith community is taking a stand against global hunger,” she said. “We’ve also gotten to know each other, and I think it’ll be a springboard for us to come together for other common causes, as well.” 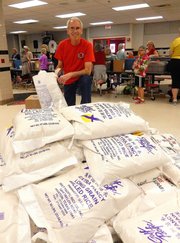 The Rev. Corky Eddins, of Christ Church of Vienna, helped unload these bags of rice.

Among the participants was Michele Shaw of Fairfax Community Church. “We did a few of these events at our church and wanted to do more,” she explained. “And we help out here because they always need extra, experienced people to lend a hand.”

One of the busiest workers that day was the Rev. Corky Eddins, an associate pastor with Christ Church of Vienna, which meets at Madison. And he brought at least 150 church members with him.

“What’s great is that people of all ages are participating,” he said. “And it’s not just giving money, but hands-on – giving of their time and love to meet a real need worldwide.”

DURING THE MADISON EVENT, Eddins and his crew did set-up and cleanup and everything in between. The night before, they unloaded five tons of soy product and 12-and-a-half tons of rice from big, 18-wheeled trucks and then lugged it all into the cafeteria.

They also set up the cafeteria-table packaging stations with food scales and sealing equipment. After the meal bags were packaged in plastic bags and sealed, they went to a boxing station where 36 bags were packed per box. Then the boxes were placed into a tractor-trailer to be driven to Miami for shipment to Nicaragua.

“For a lot of children, it’s the only hot, nourishing meal they get,” said Eddins. “And they can add their own spices.” 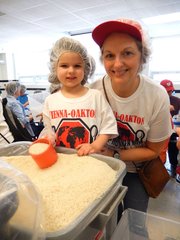 “Most of our meals go into school feeding programs,” said Millman. “Every three seconds, someone dies from hunger or hunger-related diseases. That’s 25,000 people a day – and 13,000 of them are children under 6. Our mission is to stop hunger now in our lifetime.”

At one of the tables, Brenda Burns of the Vienna Assembly of God measured rice with her 4-year-old granddaughter. She said 16 members of her church were there volunteering. “We’re excited about this project,” said Burns. “Doing something that makes a difference resonates with us as a group,” she explained. “We think the love of God expresses itself through us, but we have to put it into action.”

Also helping was Luc Rousseau, a Thoreau Middle School seventh-grader. Boxing up the meal packages, he’d come to the event on his own. “I’m a Boy Scout and I wanted to get service hours,” he said. But besides that, he added, “This is a good thing to do because it’s giving food to the needy, and it makes me feel good to do it.”