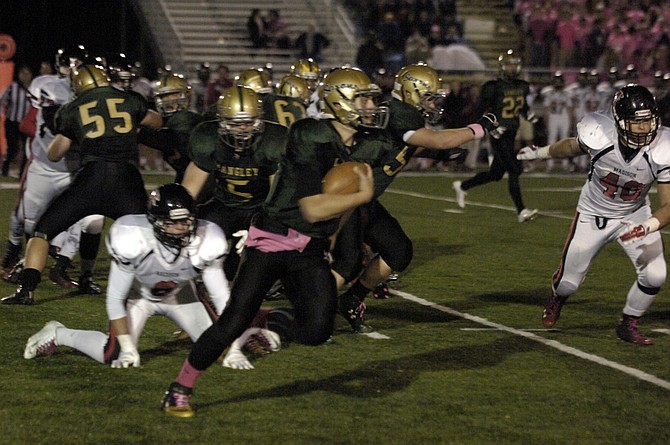 Langley quarterback Jack Anderson led the Saxons on a game-winning drive in the final two minutes against Madison on Oct. 31. Photo by Craig Sterbutzel.

Langley running back Tyler West ran for 220 yards and a touchdown against Madison on Oct. 31.

Rather than panic, Anderson, a first-year varsity starter, made a play, scrambling for 17 yards and a first down against the Madison defense.

It was only one play, but for now, it saved the Saxons’ season.

Three plays later, Anderson connected with Daniel Salamone for an 11-yard touchdown, running back Tyler West converted the ensuing two-point attempt and the Langley football team held on for a 21-20 come-from-behind victory over Madison on Oct. 31 at Langley High School.

The victory extended Langley’s winning streak to three, improved the Saxons’ record to 5-4 and kept their postseason hopes alive entering their regular-season finale against rival McLean on Nov. 7.

Madison scored the go-ahead touchdown on a 9-yard pass from Jason Gastrock to Matt Bacigalupo, giving the Warhawks a 20-13 lead with 1:55 remaining. After a touchback on the ensuing kickoff, Langley took over at its own 20.

The Saxons proceeded to march 80 yards in 13 plays, led by the legs and right arm of Anderson.

Anderson completed 5 of 11 passes for 59 yards on the Saxons’ final drive, including the 11-yard scoring strike to Salamone with 17 seconds remaining. The biggest play, however, was Anderson’s 17-yard scramble on fourth-and-10 at the Madison 29.

“You know that you have to get it,” Anderson said of the team’s mentality during the game-winning drive. “It’s desperation, so you’re just looking for any little thing. ... All we were really thinking is we’ve just got to end this game and win so we can hopefully beat McLean and get to the playoffs.”

For the game, Anderson completed 13 of 27 passes for 134 yards, with two touchdowns and an interception.

“First-year starting quarterback, young kid, that was incredible,” West said. “The way he stepped up ... to run the two-minute drill at any level is tough.”

After Anderson’s touchdown pass pulled Langley within one, head coach John Howerton elected to go for two and the win. West took the direct snap in Langley’s “Ram” formation and crossed the goal line.

“I’m not big on kicking,” Howerton said. “That’s kind of backfired on us in the past. I figure we’ve got maybe the best back around. We give it to him, and he either makes it or he doesn’t.”

West made Anderson’s job easier throughout the night as the senior carried 31 times for 220 yards and a touchdown. His 56-yard scoring scamper cut Madison’s lead to 13-7 in the first quarter.

“I think the kid,” Howerton said, “is the best back in the area.”

Madison continued to fight after Langley’s go-ahead touchdown, using a hook-and-ladder play to get the ball to the Saxon 32-yard line, but the Warhawks missed a 49-yard field goal as time expired.

Madison led 13-0 in the first quarter, including a 59-yard touchdown pass from Gastrock to Nate Williams on the first play from scrimmage. The Warhawks defense stepped up throughout the game, holding Langley scoreless in three separate trips inside the red zone. The Saxons’ final trip into the red zone, however, produced the game-winning score.

“We were able to punch it in,” West said, “in the pressure situation.”

Langley will close the regular season with a home game against rival McLean at 7:30 p.m. on Friday, Nov. 7 as the Saxons fight to make the playoffs.

“To pull that one out,” Howerton said, “was certainly huge.”