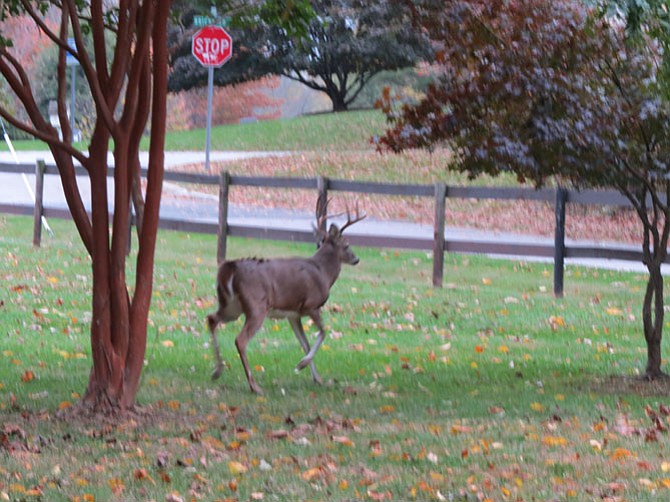 A buck heads toward Brickyard Road, pursuing a doe. Photo by Mary Kimm. 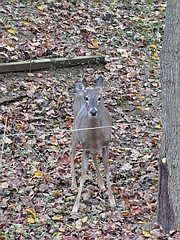 A doe browses near Brickyard Road with a buck in close proximity.

The effect of deer on the forest’s understory.

Reducing the number of deer by lethal means can be divisive in residential neighborhoods, said George Timko of the Maryland Department of Natural Resources.

This was not news to the 100-plus residents of a Potomac neighborhood who had gathered to discuss planned bow hunting in their 500-home neighborhood. For weeks, stern warnings helped to keep a lid on smoldering exchanges across the neighborhood listserv which occasionally broke out in open hostilities between those who believe thinning the deer herd by lethal means is an essential step and those who are dismayed by the idea of hunting within the tight confines of their neighborhood. Some oppose bow hunting as cruel.

Earlier this year, the Montgomery County Council voted to reduce the “safety zone” for archery hunting from 150 to 100 yards from "a dwelling house, residence, church or other building occupied by human beings," unless the occupant of the building gave permission. It was a step taken in recognition of the need to reduce the number of deer in the county.

Many residents did not anticipate that a safety zone the length of a football field could mean archery hunting in a neighborhood where houses sit less than 30 feet apart on one-third of an acre lots.

Officials emphasized that archery hunting is safe, with no record of any non-hunter ever being injured by a bow-hunter in Maryland. But residents worried about safety for children and pets, as well as being exposed to the sight of injured, dying or dead deer.

It appeared that the agreement of 28 households plus the owner of a narrow, strip of conservation easement would allow a hunt to proceed in a closely defined area without gaining permission from the larger community. As the nearly three-hour meeting proceeded, those opposed to bow hunting in the neighborhood slowly came to understand that bow hunting would begin on Nov. 7; there was no mechanism in place to stop it.

But on Monday, Nov. 3 came the word that the company that owns the conservation property had put its permission on hold while the homeowners association sends paper ballots to its residents to determine what level of support or dissent there is for archery hunting in the neighborhood.

MORE THAN 2,000 deer-vehicle collisions a year are reported to Montgomery County Police, according to the Maryland Department of Natural Resources. In addition to the 2,019 deer-vehicle collisions reported in 2012, 2,038 were reported in 2011; 1,930 in 2010; 1,945 in 2009; and 1,841 in 2008. Other escalating deer problems include damage to agriculture and landscaping; environmental damage affecting bird habitat and other wildlife; and lyme disease.

Rob Gibbs, chair of the Montgomery County Deer Management Work Group, emphasized the importance of reducing the number of deer. Gibbs said that local efforts, like the proposal in this neighborhood, can have a significant impact in terms of controlling the deer population going forward.

“Deer are not great travelers; most deer will live their entire life within an area about one square mile in size. This limits the impact that population management in parks alone can have in reducing deer populations much more than a quarter to a half-mile from the park,” says the current deer management report for the county. “Away from the currently managed properties, deer populations and impacts have continued to increase in our smaller parks, and on private land, much of it within neighborhoods often over a half mile from larger parcels of parkland.

“Deer vehicle collisions countywide have continued to slowly rise since 2008 despite reduced accidents around managed parkland.” But deer/vehicle collisions have gone down in areas with a quarter mile of county parks where there are active measures to cull the deer, mostly sharpshooting or managed hunts with guns.

TImko, from Maryland Department of Natural Resources, also noted some non-lethal approaches, including sterilization, might work in neighborhoods, but it is expensive and logistically difficult. At least one local veterinarian said she would donate her services to sterilize deer. There is also one birth control drug approved for deer in Maryland, GonaCon, which can be effective for two-to-three years.