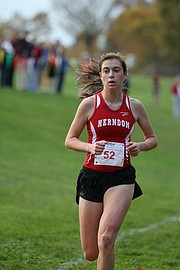 Herndon’s Lauren Butler qualified for the 6A North region meet with a top-15 finish at the Conference 5 meet on Oct. 30.

Herndon harriers Lauren Butler and Jack Morris placed in the top 15 in their respective races at the Conference 5 meet on Oct. 30 at Burke Lake Park, earning each a berth in the 6A North region meet on Nov. 5.

Butler was the lone Hornet to place in the top 15 during the girls’ race, placing 12th with a time of 18 minutes, 43 seconds.

Herndon finished fifth in the team standings with a score of 126. Oakton won the team title with a score of 30, followed by Robinson (49), Westfield (83) and Chantilly (116). The top four teams qualify for regionals.

Morris finished 15th in the boys’ race, punching his ticket to regionals with a time of 16:02. Morris helped Herndon place fifth with a score of 120. Chantilly won the team championship with a total of 47, followed by Oakton (52), Robinson (62) and Centreville (86).

The Seahawks had a pair of top-10 finishes, led by runner-up Andrew McCool, who crossed the finish line with a time of 16 minutes.

Sean Miller finished ninth with a time of 16:18.

The South Lakes girls’ team took fourth with a score of 106. Madison won the championship with a total of 24, with harriers placing first, second, third and fourth.

Washington-Lee finished runner-up in the team competition with a total of 54, and McLean took third (99).

Grace Obando was the Seahawks’ top finisher, placing 13th with a time of 19:01.

The Reston Masters Swim Team was named U.S. Masters Swimming Club of the Month for October.

In August, the team placed sixth out of 178 teams at the national championships.