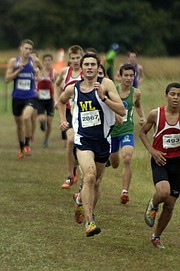 The Washington-Lee girls’ cross country team continued its recent success, earning a region berth with a runner-up finish at the Conference 6 championship meet on Oct. 29 at Burke Lake Park.

This time, the W-L boys’ team put forth a championship performance of its own.

The Generals won the conference championship with a score of 38. Each of W-L’s five point-scoring harriers placed in the top 15, and its seven best finished in the top 17.

“From the beginning of the year, I thought the boys were extremely cohesive and deep – we have seven or eight boys that were battling all season for our varsity spots and I was really pleased with the squad we brought to the conference meet,” W-L head coach Matt Przydzial wrote in an email. “Since last season, the boys have certainly been in the shadow of the girls' team and this season they're certainly making a name for themselves.”

“The boys’ team did exactly what they needed to do,” Przydzial wrote. “ On paper, they were favored to win but we realized Madison is a great team, very well-coached, and [if] we didn't run our best, it could have ended up a lot closer. ... Five of our top seven ran PRs. I was particularly pleased with Matt Tatum, our No. 3, running a huge PR and picking up a number of spots to make for a low team score.”

The W-L girls’ team, which finished state runner-up last season, placed second at the conference meet behind a dominant Madison team, which had individuals finish 1-4.

“Madison girls are certainly one of, if not the, best team in the state,” Przydzial wrote. “We knew our girls were racing for second place but they certainly got the job done.”

“Elie Seff, our No. 5 runner, has improved more than 2 minutes over the last three weeks,” Przydzial wrote.” She's stepping up at exactly the right time and keeping our top five girls very close to one another, helping our team score tremendously.”

Washington-Lee will compete at the 6A North region meet on Wednesday, Nov. 5 at Burke Lake Park.

“Since the beginning of the season, our goal on both sides has been to take as many runners as possible to the State meet, whether it be a number of individuals or one or two full teams,” Przydzial wrote. “The ultimate goal would be to bring both the boys and girls full teams to the state meet, which has never happened in school history.”