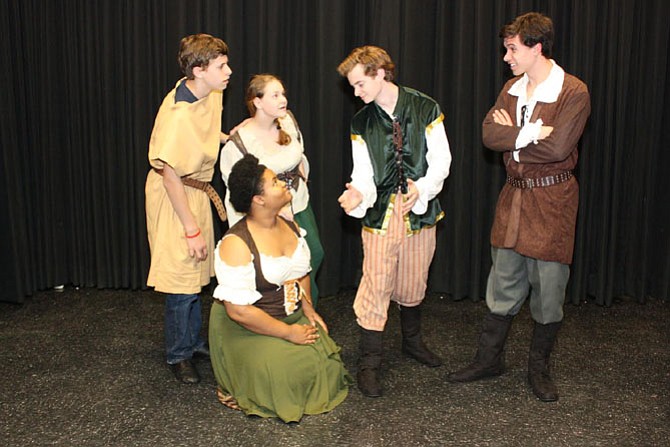 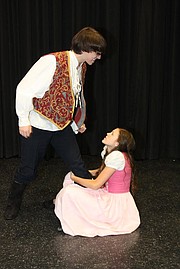 Hermia (Katelyn Sparks - right) pleads for Lysander's (Cole Miles) love back after he is mistakenly given a love potion, turning his affections to someone else.

South County High School Theatre presents “A Midsummer Night's Dream,” William Shakespeare's most popular comedy, on Nov. 13-15 at 7 p.m. The comedy, written around 1594 or 95, portrays the adventures of four young lovers and a group of amateur actors, their interactions with woodland fairies and a duke and duchess. Taking place in a mythical Athens and an enchanted forest, there is a handsome fairy king, a misguided parent, star-crossed lovers, a weaver who's transformed into a half-donkey, wood sprites and elves. This work is widely performed around the world, and no wonder - it's about the world's most popular pastime, falling in love. But as Puck knows, falling in love can make fools of us all.

South County theatre teacher Kathie McCormally chose the show because she wanted a show that would be “somewhat challenging to the students”.

“One of my priorities was finding a show with a larger cast. This show has over 20 characters,” McCormally continued. “We have not tackled a Shakespeare play for a few years, and I like to mix in some classical theatre every couple of years.”

The show will perform on Nov. 13-15 at 7 p.m. General admission ticket prices will be $10 for adults and $8 for senior citizens and students at the door. Discounted tickets may be purchased in advance at www.southcounty theatre.org. The Dale S. Rumberger Auditorium at South County High School is located at 8501 Silverbrook Road, Lorton.

With a cast of over 20 diverse characters, “A Midsummer Night’s Dream" offers four plots that intertwine throughout the play, so the show has many "lead roles." The production includes Cole Miles (Lysander), Katelyn Sparks (Hermia), Felicia Hecker (Helena), Ethan Schulze (Demetrius) as the lovers; Kyle McKnight (Oberon), Becca Symmes (Titania) as the King and Queen of the fairies; John Gereski (Bottom) and Taylor Gouterman (Quince) as a part of the mechanicals; and Aaron Lichstrahl (Theseus) and Jahnee Simay (Hippolyta) as the Duke and Duchess of Athens.

There are many different aspects that challenge students when performing Shakespeare. “It is crucial that the students in the show actually understand what it is they are saying when they deliver their lines, and that they slow down the delivery of the lines,” McCormally adds.

A timeless classic that all will enjoy, all of "Midsummer’s" scenarios have engaging characters that will be stuck in the minds of audience members.