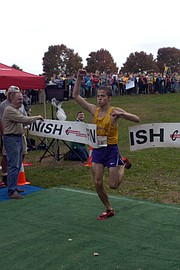 The Lake Braddock boys’ cross country team won the 6A North region championship, and the Bruins, Robinson and West Springfield will each send their boys’ and girls’ teams to the state meet on Saturday, Nov. 15, at Great Meadow.

Led by senior Alex Corbett, the Lake Braddock boys’ team won the region title with a score of 37 on Nov. 5 at Burke Lake Park. Oakton finished runner-up with a score of 86. West Springfield (118), Chantilly (120), Robinson (170) and Washington-Lee (203) also qualified for states.

Corbett won the individual title for the Bruins with a time of14:41. Six days prior, Corbett became the first Lake Braddock boys’ harrier to break 15 minutes when he won the Conference 7 championship with a time of 14:47, which at the time was the 11th-best time in the history of the Burke Lake course.

Hunter Jetras was Robinson’s top finisher, coming in 16th with a time of 15:35.