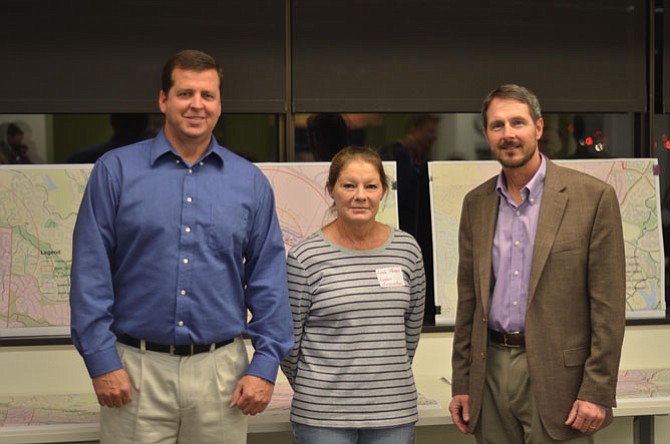 Representatives from Reston Association, Fairfax County Public Schools (FCPS), and Fairfax County attended the first “Snow Summit” Thursday, Nov. 6 at 6:30 p.m. at Reston Association Headquarters, 12001 Sunrise Valley Drive. The event was open to public and was held to prepare Reston Association members for the upcoming snow season. Last year Northern Virginia had an extended winter with 11 FCPS snow days. The winter weather and snow caused some confusion as Reston residents tried to clarify who has responsibility for clearing snow from sideways and pathways. 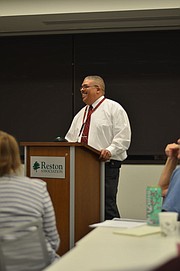 Goals of the meeting were to help educate the community about the shared responsibility for snow removal and create opportunities for grassroots collaboration and planning on a local level. Reston Association CEO Cate Fulkerson introduced the panel of guest speakers which included Acting Director of Facilities with Fairfax County Public Schools Brian Crawford and Fairfax County Director of Maintenance and Stormwater Management Division Bill Hicks. Representatives from the Virginia Department of Transportation (VDOT) did not attend the meeting,

FULKERSON said a goal of the meeting was to start dialogue or conversation about responsibilities for snow removal. Last winter, many school children had to walk on street roads because sidewalks to their schools had not been cleared. Maps were shown of the areas serviced by Reston Association (RA) and members of the panel explained which locations they could clear in the event of a snowfall.

Mike McNamara, acting deputy director for the Maintenance for the RA, explained his crew of snow cleaners service pathways and some parking lots. “When the snow hits two inches we go out,” said McNamara. While RA plows its 55 miles of paths, it does not shovel sidewalks unless they are on RA property. Acting Director of Facilities with FCPS Brian Crawford explained that FCPS custodians clean up snow at school locations. “We are trying to find new ways to help the schools,” said Crawford.

RA Senior Director of Parks Larry Butler explained how VDOT is responsible for maintaining the road systems. VDOT does not, however, shovel sidewalks. This leads to a gap of responsibility or open question as to who will shovel the sidewalks areas.

“It's hard to imagine a cluster establishing any organized program, volunteer or contracted, for removing snow from areas outside their ownership without appropriate liability protection,” stated Reston resident Charlotte Marson. “It's one thing for an individual to shovel a walk, but once that effort is part of a formal program under the aegis of the cluster it raises issues of expectations, standards, and responsibility… Many clusters contract only for snow removal from the street and parking lot. Shoveling sidewalks and access paths to mailboxes and fire hydrants is done by cluster residents. Contracting for snow removal on VDOT-owned sidewalks that run adjacent to cluster property is far beyond the resources of most clusters.”

RESTON HAS 134 cluster associations (townhome and patio home style neighborhoods), 30 condominium associations and 4,800 single family homes. There are also 17 apartment buildings in Reston, comprising more than 3,800 units. The clusters are supported by a locally-run, nonprofit homeowners association governed by neighbors themselves. “I would like to see if Reston would open dialogue on a facility for snow blowers,” said Reston resident and property owner Richard Badley. “I understand liabilities, but I guarantee you there are volunteers.” Badley said many Reston clusters lack locations to store machines for removing snow, and believes residents would respond to a challenge to help clear snow within their neighborhoods. 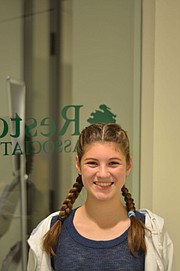 “I think the discussions highlighted the need for more education on the subject and exploration of some of the ideas that were voiced,” said Reston resident Richard Chew. “I was particularly interested in the expressed need for having workable plans in place before the first heavy snow, the need for greater coordination amongst the ‘silos’ at FCPS responsible for clearing snow, the need for centralized ‘command and control’ when the community needs to be engaged, and the challenges of communicating with the community.”

“The biggest takeaway was the prioritization, by school, of those sidewalks that would create the greatest benefit if they were shoveled,” said Kirsten Carr, director of communications & community engagement with the Reston Association. “We are certainly going to explore some of the other suggestions and look into the ever-present liability issue as well. I think meeting with the schools is next on the list.”

Although he was unable to attend the snow summit, Reston Lake Anne Elementary School Principal Brendan P. Menuey expressed confidence his school will make it through the winter fine and well-prepared. “The main concern I have is the safety of children and their families, particularly as they move to and from school,” stated Menuey. “If all residents and property managers, schools included, do their part with this same goal, I am certain things will be smooth.”

“We were thrilled by the turnout from our members and were intrigued by several of the ideas generated by our members as they worked together to create solutions on how to manage the winter season,” stated RA CEO Cate Fulkerson. “Staff is going to go through the comments and questions received during the evening and work with our partners at Fairfax County Public Schools, Fairfax County and other community groups to come up with the next steps. In the interim, the workshop was recorded and it will be available for people to view online and submit even more comments. As we know, the best solutions will be those with buy-in from our members and neighbors so we look forward to including the community in our next steps.”