Honoring Potomac’s People of the Year 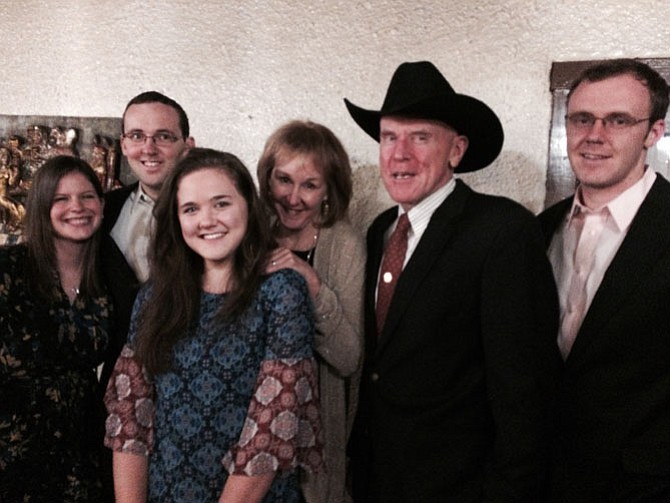 From left: Jill and John Phillips, owner of Squeals on Wheels, were named Business People of the Year, and celebrated with family including Kate Brownstein, Grant Phillips, Raquel Phillips (center), Jill, John and Tyler Phillips. Photo by Mary Kimm.

Honoring Potomac’s People of the Year

Friends, family and members of the Potomac Chamber of Commerce gathered Thursday evening, Nov. 13, at Normandie Farm Restaurant to honor Potomac’s People of the year, including Citizen of the Year Barry Perlis, who moved to Potomac in 1976.

Perlis is vice-president of the Potomac Community Village, part of the national village movement providing support for local residents to stay in their homes and neighborhoods as they get older. Perlis also volunteers at Manor Care Nursing Home, serves as president of the Ridgely Neighborhood Homeowner's Association, is a member of the board of directors and Investment Committee of Jewish Social Service Agency and is president of two synagogues.

Perlis for the past 10 years has served as chairman of U.S. operations of Save a Child's Heart. providing life-saving pediatric heart surgery and follow-up care for indigent children from developing countries.

Business People of the Year Jill and John Phillips have been involved in every aspect of Potomac life. They are both former Army officers, retired to Potomac and bought a home with a large yard for their five children. Jill Phillips thought it would be a good idea to acquire an alpaca to help "trim the lawn." As she collected more animals — goats, chickens, ponies — they decided to launch "Squeals on Wheels," a portable petting zoo with pony rides. The concept was almost an instant hit, and they have been in business ever since.

"It is a huge honor for us to be chosen as Business of the Year by the Potomac Chamber of Commerce," said Jill Phillips. "In recognizing our family business, you are honoring the importance of being engaged, giving back and sharing our gifts with the community. It is a privilege to operate a business in Potomac and our purpose is to share our love of animals with our home town and to bring joy to children and families."

The Phillips are also involved in volunteer work for many Potomac organizations. They are helping establish the Potomac Community Village; Jill Phillips sits on the board of the Potomac Chamber of Commerce and the West Montgomery County Citizens Association; John Phillips is on the board of the Brickyard Coalition. They often donate their petting zoos to charitable causes, including the Armed Forces Retirement House of Washington D.C., Luke's Wings, the Potomac Mom's Club, the Cabin John Volunteer Fire Department, the River Falls 4th of July Parade, the Potomac Community Center, the carnival day for Big Train Baseball and for the Collingswood Nursing Center.

Sam Greenberg, Youth of the Year, has been named Outstanding Scholar at Bullis as the student with the highest GPA in his class three times. He is the captain of his school’s “It's Academic" team — the first team in school history to win two on-air matches. He is also a musician who plays trumpet in the Bullis Concert Band and Jazz Band, an athlete who pitches and plays first base for his baseball team, serves as a student tutor and Bullis Ambassador and is member of the National Honor Society. Sam has also volunteered in Costa Rica at a summer camp for underprivileged children, served as a "Band-Aide" with the Interplay Company Band, a music program for people with disabilities.

Cissy and Mac Grant, this year’s Grand Marshals, are known by many locals as "Mr. and Mrs. Potomac." Cissy Finley Grant is an award-winning journalist and reporter who is a fifth-generation Montgomery County resident. She was employed by the Montgomery County Sentinel, the Washington Evening Star, the Gaithersburg Gazette and still contributes to the Potomac Almanac.

Being a fifth generation Montgomery Countian, Cissy Grant says it has been impossible not to delve into politics on occasion. This included helping her close friend, the late Jean Cryor, get elected to the Maryland House of Delegates. “The group of 10 who called ourselves her ‘Kitchen Cabinet’ still get together monthly,” Cissy Grant said.

She has also volunteered for the Montgomery County Heart Association's Women's Board and founded and co-chaired the Heart-to-Heart Ball for 22 years. She also served on the Shady Grove Foundation Hospital Board when the hospital opened. She has delved into politics, public relations and authoring a cookbook and magazine articles.

Cissy’s husband Mac Grant worked for NASA for 33 years, and has served as board member of the Prevention of Blindness Society of the Washington Metropolitan Area, the Montgomery County Historical Society, and the Potomac Theatre Company. Mac Grant started with Potomac Theatre as a song-and-dance performer and retired from that group as master carpenter. He portrayed George Washington for DAR-sponsored elementary school programs in Potomac. He has served the Potomac Day Parade as a participant, as a line-of-march coordinator, and, finally, as an announcer. Still, Mac Grant said, “It is my biggest honor to be sitting next to Cissy Grant, wife and co-honoree.”