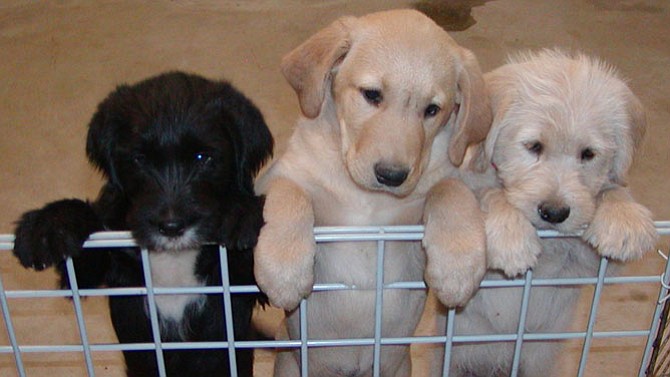 Among the animals that have been adopted is Buddy, in the middle. Photo Courtesy of FMCA

“There’s no better way to go than adoption,” said Dottie Fitzgerald at the Friends of Montgomery County Animals’ fall luncheon with boutiques at TPC at Avenel on Wednesday, Nov. 12. Adoption success stories abounded at the annual event attended by women and men devoted to the welfare and humane treatment of animals. 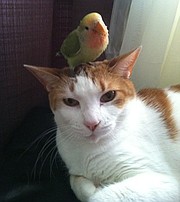 Cairo the cat and Hope the bird

Fitzgerald added, “We are so aligned with the animals in so many things. We can learn so much from them and in my case it’s from dogs. Your dogs teach you compassion and the true meaning of forgiveness.”

Attendee Brenda Monaco, who said her love of cats goes back to her childhood, has fostered 90 kittens during her eight-year tenure as a member of Friends. “We always had cats in the family. As fosters, we’re just a stop along the way to help them. We help these little guys get a second chance. It makes us feel good we’re helping this tiny little creature and finding it its forever home,” said Monaco.

Friends, an all volunteer, 501(c)(3) non-profit established in 1974, is celebrating its 40th anniversary. The organization has no shelter or office and relies heavily on private donations and volunteers who assist at adoption clinics on Saturdays at the Germantown PetSmart; provide foster homes; assist with trap-neuter-release/place (TNR/P) endeavors; and support fundraising projects.

A primary focus of the group is the issue of abandoned strays and at-risk animals living on the street. Partnering in 2014 with some of the areas most experienced TNR trappers to provide financial assistance for targeted, high-impact areas, has resulted in the successful spay/neutering of 200 felines. According to Friends’ literature, the majority of the animals are abandoned strays, litters of kittens born in colonies, or kittens born to abandoned house pets. Many are unable to survive the outside elements and are malnourished and in need of medical treatment. Though the group receives reduced rates from several local veterinarians, costs are high. Ninety-six percent of the animals in the group’s TNR program require full vetting.

Friends often extends a helping paw of financial support in emergency situations to other humane and wildlife groups. Recent recipients include Tip Me Frederick for TNR and Owl Moon Raptor Center for the preservation of the birds of prey population.

Potomac resident Claire Proffitt, president of Friends, emphasized the need for funding and outside donations. She said the group has helped individuals and families with the support needed to ensure they could keep their pets healthy and happy. She shared several stories including the story of Peanut, a rescued cat, who arrived at a Friends’ participating veterinarian “half dead” after two misdiagnoses.

“He had ingested a long thread that had cut his intestines and liver in a number of places. After two touch and go surgeries, two blood transfusions and much TLC, he has completely recovered,” Proffitt said. “Friends also helped a young family with food, heartworm meds and flea control for their three rescued dogs after learning the mother of the family required brain surgery after childbirth and the father lost his job.”

Friends is committed to finding forever homes for the 100-plus cats, kittens and puppies currently in foster care. Approximately 200 animals have been placed to date. Recent adoptions have included, “Buddy” a Labrador/Australian shepherd mix whose owner said, “Things are going so well with Buddy. He is so anxious to learn. He’s growing so fast – he still has a way to go to grow into his feet though. Thank you so much – we love him.”

Sometimes unexpected friendships develop as in the case of an adopted orange and white domestic shorthair cat named Cairo. His family reports that he is wonderful, they feel lucky to have him, and he recently befriended an abandoned baby lovebird named Hope.