But is that a bird in your hand? 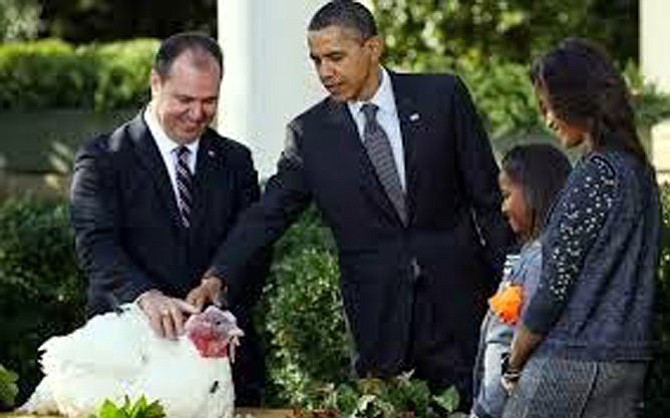 Each year before Thanksgiving, the President of the United States “pardons” a live turkey presented to him by the National Turkey Federation. The gifts have been going on for over a century, but it wasn’t until recently that the turkey pardon became an official White House tradition.

There are many stories surrounding the origin of the presidential turkey pardon. Some say the tradition can be traced as far back as 1863, when by some accounts, President Lincoln interrupted a Cabinet meeting to grant clemency to a turkey named “Jack” his son had befriended. An 1865 dispatch by a White House reporter later confirmed this version noting, “Tad’s plea was admitted and the turkey’s life spared.”

Records show, however, that official gifts of turkeys to American presidents date from the 1870s, when a marketing-savvy Rhode Island poultry dealer named Horace Vose began sending birds to the White House. In 1873, Vose delivered a 38-pound stunner to President Ulysses S. Grant. Vose went on to supply turkeys to presidents for over 40 years, becoming a national celebrity.

By the 1920s, turkey gifts began taking on a whole new flavor. Chicago’s Harding Girls Club sent a turkey to President Warren Harding in 1921 dressed in a custom-made flying suit complete with goggles. The bird arrived at the College Park airport on a mail plane escorted by an armed guard. Another turkey arrived in 1922 in a crate designed as a battleship.

Harry Truman was not the first president to pardon a turkey, but many stories have him originating the tradition. In 1947 at Thanksgiving, Truman was urging Americans to conserve food in an effort called “Poultry-Less Thursday.” Poultry growers were outraged and in protest sent crates of lives chickens dubbed “Hens for Harry” to the White House. The stunt grabbed headlines. Though records show Truman did not eat turkey that particular year, in December of 1948, he accepted two turkeys and was heard to remark they would “come in handy” for Christmas dinner.

President John F. Kennedy is known to have spared a turkey, but his decision was not due to a love for the bird. Kennedy received a Thanksgiving turkey from the Poultry and Egg National Board with a sign around its neck reading “Good Eatin’ Mr. President.” Kennedy sent the bird back to the farm saying, “We’ll let this one grow.”

President Ronald Reagan is the first president on record to formally issue a “pardon” to a turkey; in this case a turkey named Charlie, who was sent to him in 1987 from a petting zoo. Some say, however, the reprieve was a joke made to deflect criticism over his considering a presidential pardon of Iran-Contra player Oliver North.

It was George H. W. Bush who, in 1989, made the turkey pardon an official White House tradition. Rumor has it that he did this in response to animal rights activists picketing nearby. He said, “Reprieve,” “keep him going,” or “pardon” — it’s all the same for the turkey, as long as he doesn’t end up on the president’s holiday table.

Whatever the reason, turkeys have been pardoned ever since and taken to area farms to live out the rest of their natural lives. For many years the birds were sent to Frying Pan Park in Fairfax, Va. Other “farms” have included Disneyland and Walt Disney World Resorts where the turkeys have served as marshals in the annual Thanksgiving parade.

The National Thanksgiving Turkey Presentation and pardon take place in the White House Rose Garden every year shortly before Thanksgiving. In an official ceremony, the president is presented with a live domestic turkey and issues a pardon.