Generals finish eighth in 6A race at Great Meadow. 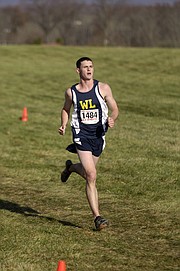 Washington-Lee senior Patrick Odlum competes during the 6A boys’ race at the VHSL state meet on Nov. 15 at Great Meadow.

Making its first appearance in 33 years at the state meet, the Washington-Lee boys’ cross country team finished eighth in the 6A standings on Nov. 15 at Great Meadow, capping a memorable season for the Generals.

W-L earned the sixth and final state berth during the 6A North region meet on Nov. 5 at Burke Lake Park, fulfilling a season-long goal.

“The boys ran hard at a meet where it's expected that you run your best,” W-L head coach Matt Przydzial wrote in an email. “We had a very emotional meet at regionals – qualifying for states in the last spot, by only two points. It was tough for our guys to really run a breakout race [at states] when I think most of them ran their absolute best last week.

“... It was our first trip to states for the boys’ team in 33 years. This had been our goal all season, but qualifying out of the 6A North region is very difficult. The best five boys’ teams in the state are all from 6A North. Qualifying speaks to the resilience of our boys and it's the result of 7-10 guys fighting for spots every week since September.”

“Isaac Mortimer-Lotke has gone from 11th on our team at our preseason time trial to our No. 4,” Przydzial wrote. “He's been progressing all season and I thought he put a cap on a great season at states.”

Oakton repeated as team champion with a score of 44, followed by Lake Braddock (58) and Madison (83).

“Over the past few years, our teams and coaching staff have been working to change the culture of our team from one or two talented runners to a program (boys and girls) that can be successful each year,” Przydzial wrote. “Obviously, we lose a lot of talent to graduation but we do bring back six of our top 10 girls and our boys will be young next season, but I really believe that our boys’ team can be in the top half of the region two years from now.”