‘Audience Will Root for the Characters’
Votes

‘Audience Will Root for the Characters’ 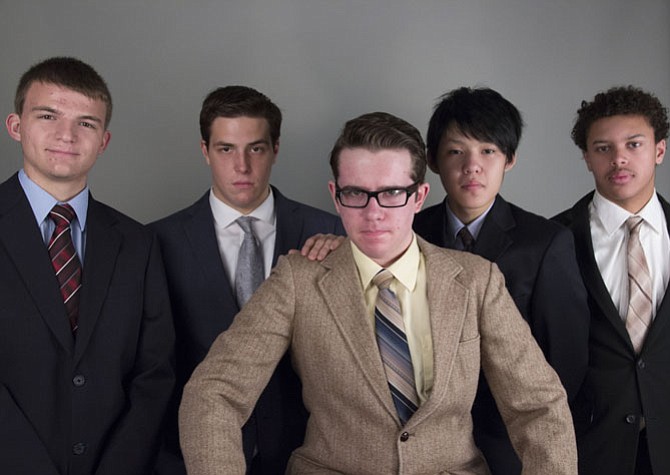 Based on true events, Oakton High’s upcoming play, “Radium Girls,” is a compelling drama illustrating a tragic time in American history. Show times are Thursday-Saturday, Dec. 4, 5 and 6, at 7 p.m. Tickets are $10 at the door.

The story takes place from 1917 through the 1920s in a New Jersey factory and centers around three young women who work there. “They’re painting watch dials with glow-in-the-dark paint for the U.S. soldiers away at war,” said senior Neil Totten, directing the show with classmate David Fish.

The paint contains radium and, as they work, the women lick their brushes to make a finer point. “This was before people knew radium was poisonous and could cause cancer,” said Fish. “One girl suddenly collapses at work, very ill, and the other girls get suspicious that the company hasn’t told them everything about what they’re doing. There’s a lawsuit, with one lawyer representing the company and another representing the workers.”

There’s a cast and crew of 30 and a multi-level set with a clock in the middle. The scenes take place at the factory, the owner’s office, a home, the street and a doctor’s office. Totten said things are going well and the actors “pick up direction quickly. They’re all very talented, especially our two leads, Veronica Silva and Rob Condas.”

Totten’s directing his third Oakton show and Fish said he learned a lot from him, including “how to morph the actors’ performances into the vision Neil and I have for the show.” Totten enjoyed working with Fish, since they’re real-life friends; and since it’s such a character-driven show, Totten was pleased to see the actors carry out his instructions.

PLAYING Arthur Roeder, the head of the factory, the Radium Corp., is senior Rob Condas. “He’s climbed to the top of the corporate ladder and is struggling to be the best businessman he can be,” said Condas. “But in doing so, he’s turning away from the things that really matter to him, especially his wife, employees and friends. He’s a kind man at heart, but chooses not to believe his company could be at fault. If he did, he’d have to admit to the crimes he’s done – and doing that would destroy him.”

Condas says it’s the toughest character he’s ever played because “I’m primarily a comedic actor and he’s a morally ambiguous, serious character with a sad story arc. But it’s my favorite role because it has some meat to it and, when I see the other people on stage, I see them as their actual characters.”

The audience will like this play, said Condas, because “the characters normally played as stereotypes – the mean businessman, the ditz, crazy person, newlyweds, etc. – are delved into more deeply. And that makes the story a three-dimensional, tragic tale.”

Senior Veronica Silva portrays dial-painter Grace Fryer. “She’s a shy, quiet, obedient girl who loves her friends,” said Silva. “After two of her friends get sick, she works with a lawyer on a lawsuit against the company.”

“I love this character because she’s similar to me; she’s friendly and sees the good in people,” continued Silva. “This role helped me get a better grasp on how to delve deeper and get inside a character’s mind, and I think she’s fighting for a great cause.”

Believing the audience will feel “emotionally connected” to the show, Silva said, “They’ll find the story’s suspense appealing and really fall in love with the characters.”

Playing Dr. Von Sochocky is senior Grant Seastream, a Ukrainian chemist who invented the radium paint in his kitchen. “He’s excited about his work, founded the Radium Corp. and knew many of the girls there,” said Seastream. “He suspects that something’s wrong with radium, but really doesn’t know.”

ENJOYING HIS ROLE, he said it’s “fun doing a Ukrainian accent and I have high energy in my scenes. I also get to flirt with one of the plant managers, so one of the challenges is trying to show what’s really important to this man.” Overall, said Seastream, “The audience will like the show’s ambiguous morals and will sympathize with and root for the characters as the play goes on.”