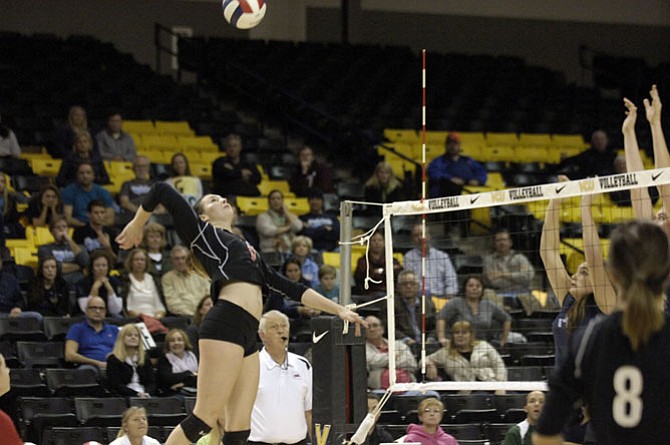 Madison outside hitter Natale Zanellato had 28 kills against First Colonial in the 6A state volleyball final on Nov. 21 at VCU’s Siegel Center in Richmond. Photo by Craig Sterbutzel.

Madison outside hitter Jayne Carter (7) had 17 kills against First Colonial.

Senior outside hitter Marissa Roy talked about the Warhawks overcoming a slow start.

Junior outside hitter Jayne Carter admitted she was emotional.

Senior libero Virginia Moore said the result of Friday’s match wouldn’t sink in until she was ready to head back to Vienna.

“This whole season has felt unreal, so the end of it kind of feels unreal, too,” said Moore, a first-team all-region selection. “I think when I sit down on the bus, it’s going to hit me. I might not be happy, but … I’m proud of this whole season. … We did accomplish something that’s never been done before that no one can take away from us.”

The Madison volleyball team, making its first state final appearance in program history, had seven chances to put the perfect ending on its historic season of domination.

Seven times the Warhawks had a match-point serve against First Colonial.

SEVEN TIMES Madison had the opportunity to finish the 2014 campaign undefeated and walk away with a state championship.

But every time the Warhawks were on the cusp of closing out First Colonial, the Patriots found a way to answer. And after the teams had exchanged clutch play after clutch play, First Colonial outside hitter Catie Espinoza ended the epic five-set match with her 17th kill.

Madison entered the state final having lost only five sets all season. The Warhawks had swept 12 consecutive opponents and hadn’t dropped a set since beating Langley in four on Oct. 16. Madison finished the season with a 33-1 record, a Conference 6 championship and a 6A North region title.

"It’s incredible," Hall said about the Warhawks' accomplishments in 2014. "I'm in the state final for goodness sake. I think we all would say that. I know it's not what we wanted now, but when they were freshmen, did you (Madison players) think we would get to the state final when you're seniors? .... This is a great accomplishment. We've done so much for the school and the community. They were all behind us on this one. We had so much electricity in the air all week long in our school.

"I think it was great what we accomplished."

Madison trailed 14-12 in the fifth set of Friday’s state final, but a kill by Zanellato, a First Colonial error and a kill block from Carter gave the Warhawks their first of seven match points at 15-14. Carter produced three more pressure-packed kills, including one that gave Madison its final match point at 23-22, but First Colonial responded with three consecutive points for the victory.

“At that point,” said Roy, the 6A North region Player of the Year, “it’s really just whatever is supposed to happen, whichever team is supposed to win this epic [match] does, because it’s so back and forth.”

The Madison volleyball team reached the state final for the first time in program history.

Undefeated and rarely tested during the season, Madison received a quick reality check as First Colonial won the opening set, 25-17.

"It was a really good wake-up call," Roy said. "We hadn't been challenged much at all. … We weren’t used to the atmosphere, so we were adjusting.”

Zanellato and Carter carried the load offensively for Madison. Zanellato finished with a match-high 28 kills, and Carter tallied 17. The duo combined for 12 kills in the fifth set.

Madison’s Emily Davine finished with nine kills, and Emily Calhoun and Roy each had seven.

The Warhawks will graduate five players, including Roy, the region Player of the Year, and Moore, a first-team all-region selection at libero.