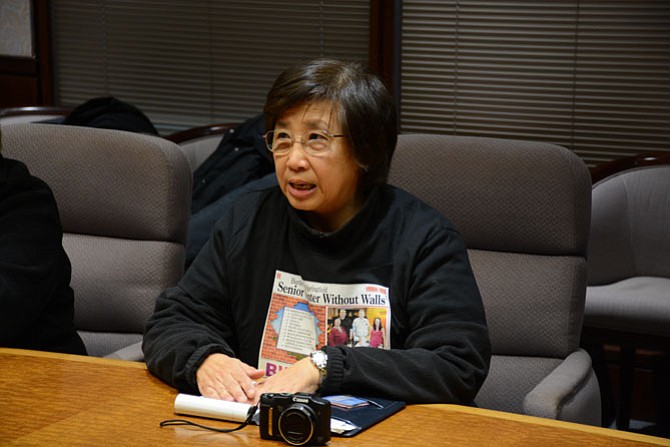 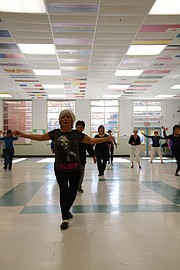 Larry Mark is 83, lives in West Springfield and practices tai chi with his wife Mary. They go to a class that meets once a week at the Burke Conservancy on Burke Centre Parkway. “It’s interesting,” he said. “It helps your balance and strengthens your neck and other muscles. Everybody needs better balance.”

Mark also volunteers as the class “monitor.” Basically, he takes attendance and reports it to a coordinator. The class costs $5 for an eight-week session, but he gets a pass on that for monitoring. Volunteers help keep the class cost down; the fees go to Fairfax County to pay the instructors.

This tai chi class is part of the Burke/West Springfield Senior Center Without Walls (BWSSCWoW), an initiative offering a variety of activities for the elderly. In addition to the tai chi, classes include line-dancing, yoga, zumba, Hawaiian hula, self defense, ballroom dancing, walking club, book history, genealogy and outside trips.

The BWSSCWoW is the project of Corazon Foley, a retired Burke resident. She got the idea after driving the 80-year-old women from her church, Church of the Nativity in Burke, to the Lorton Senior Center for Active Adults off Route 1.

“Every time I pick them up,” Foley said, “they'd say, ‘Oh Cora, why do we have to go all the way over there? Why can't we have something nearer here?’” That was shortly after Foley retired in 2007.

EVEN WITH OVER A DOZEN senior centers around Fairfax County, Foley and the ladies decided they needed a space to be active together that was more local to them. Foley said she approached then-Braddock district Supervisor Sharon Bulova about the feasibility of building a new facility in their district.

“The answer was the same,” said Foley, “Sorry, Cora, there's no money, nor staff, to get a senior center over here.”

Foley started approaching churches and other locations in Burke and West Springfield about opening up space, but didn’t get very far without liability coverage from the county. She ended up working with Evan Braff, the Regional Manager for Fairfax County’s Department of Neighborhood and Community Services.

Braff suggested a network of sites for activities, following models used in other states, creating a “center without walls.” He was able to help Foley get liability coverage and soon the BWSSCWoW had homes at Accotink United Universalist Church and the Burke Conservancy in Burke, the Durga Temple in Fairfax Station and Washington Irving Middle School in Springfield, among other locations.

They ran one pilot class in the summer of 2009: line-dancing. Over 70 seniors registered. Mark was there at the beginning. “We expanded in that fall,” he said, “and have been expanding ever since then. We have 1,200 to 1,400 names on master list, with around 250 that are registered for 16 classes in different subjects at any one time.”

Foley is proud of the opportunities the center offers the swelling senior population. “We provide them with physical fitness, intellectual fitness and social fitness,” she said, “to give them life.”

The classes have become so popular, however, that they’re becoming more and more difficult to get into. Increasing wait lists and the Board of Supervisors’ Sept. 9 passage of the FY 2014 Budget Carryover prompted Foley to approach Springfield district Supervisor Pat Herrity about whether some of those funds could be re-programed to help create a dedicated space for the BWSSCWoW.

Herrity invited Foley to the Fairfax County Government Center on Nov. 13 for a meeting. Foley brought a number of proposals to the table, centered around using the Pohick Regional Library on Sydenstricker Road in Burke as a potential site for the center. She was joined by several Burke seniors including Pacita Aguas of Burke Lake Gardens, who helped Foley start the center.

Citing a library renovation set to begin next year, Foley requested having exercise flooring added to the library’s existing large conference room and to have priority in making reservations for the room. More significantly, she asked that an expansion be built on the back of the library to house many of the center’s classes.

HERRITY ACKNOWLEDGED there is a need to help active seniors. But, he said of the Pohick proposal, “If we go this route, does this take the senior center off the table and do you get a half a solution instead of a full solution for Springfield?”

Chris Leonard, Director of Neighborhood and Community Services, was at the meeting as well. He shared county budget documentation dating back to FY 2009 for a new Springfield community center in the “beyond five-year planning stage for construction.” That would include a senior center, he said.

“When you're dealing with the budget within Fairfax County, there's over three quarters of a billion dollars of construction needs that are included in that,” Leonard continued. “When we talk about senior centers, we talk about the fact that we're competing not only with other human services buildings like community service board facilities and homeless shelters. They’re also in competition with libraries and police stations, the same pot of money.”

Herrity said the construction plans for the Pohick library have long been finalized, but would look into whether an expansion was feasible. He also agreed to check on getting the conference room floor rug removed and reservation priority for the BWSSCWoW. “I don't know whether that can be done, but that's expanding use of an existing facility and that makes all the sense in the world to me.”

Foley and her cadre of seniors left the meeting content their voices had been heard.