For Those Who Serve: Groundbreaking for Alexandria Memorial
Votes

For Those Who Serve: Groundbreaking for Alexandria Memorial 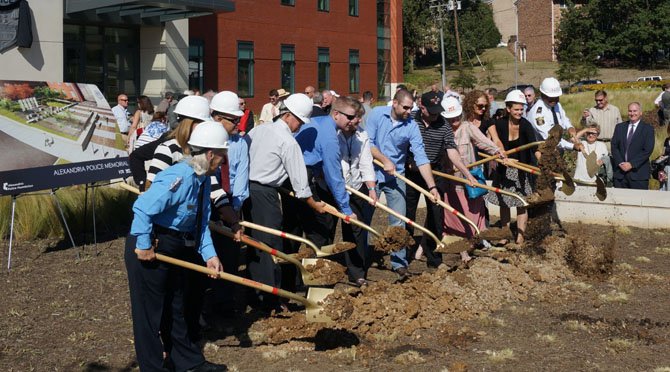 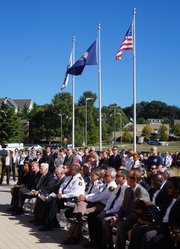 Alexandria — Alexandria police officer Eugene Yoakum was 31 years old when he was killed in the line of duty on Sept. 27, 1964. On the 50th anniversary of his death, his daughter Sharon joined other family members of slain officers at Police Department headquarters for the groundbreaking of the Alexandria Fallen Officers Memorial.

“This memorial expresses the community’s deep appreciation of our police department’s sacrifice,” said Willem Polak, board chair of the Alexandria Police Foundation. “We want to be sure that the job they do each day to keep this city safe is never forgotten.”

Polak and board members of the Alexandria Police Foundation spearheaded a fundraising campaign that raised more than $300,000 for the memorial, slated to be completed in December.

“The tireless efforts of the Police Foundation are a testament to the respect and admiration this community has for its police force,” said U.S. Rep. and former Alexandria Mayor Jim Moran.

The memorial, to be located at the entrance to police headquarters on Wheeler Avenue, will honor the 18 Alexandria officers that have been killed in the line of duty since the early 1800s.

“The worst thing a police department can endure is the loss of an officer,” said Police Chief Earl Cook. “The APF moved mountains for this memorial to be built so that we can honor the sacrifice of men like Officer Yoakum and Charlie Hill, whose wife Ginny has selflessly dedicated her energy and commitment to what we are doing.”

Ginny Hill-Obranovich, the volunteer executive director of the APF, was joined at the ceremony by her sons Charles Jr. and Robert, who is following in his father’s footsteps as an Alexandria police officer.

“This memorial expresses the community’s deep appreciation of our police department’s sacrifice.”

Cook also recognized the family of the late Vola Lawson, who was instrumental in founding the APF during her tenure as city manager.

HDR Engineering and Whiting-Turner are working together to design and build the memorial, which the APF expects to be completed before the end of the year.

“No community should take its security for granted,” Moran said. “But this security does not come without sacrifice. The 18 officers memorialized at this site remind us of that fact. It’s time we honor that sacrifice and recognize the ongoing dangers our officers face every day so that the rest of us can remain safe.”

For more information or to donate to the memorial, visit www.alexandriapolicefoundation.org.