350-plus Against Cluster Development
Votes

350-plus Against Cluster Development 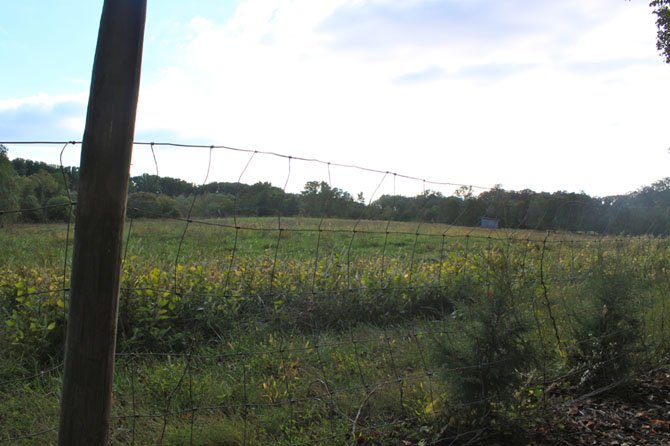 Basheer and Edgemoore are seeking to rezone the former Brooks Farm pasture to allow for 2-acre lots. A petition has been started in opposition to the proposal. Photo by Reena Singh.

There is a growing opposition to a cluster development proposal seeking rezoning in the village.

After residents found out that the Brooks Farm pasture might be rezoned by developer Basheer and Edgemoore to residential estate to increase the number of homes built on the property, more than 350 of them signed a petition voicing their disapproval.

“Our concern is not about trying to stop them,” said Great Falls Homeowners Association board member Ed Ross. “Our concern is that they’re going for a special exception to go from [Rural Agriculture] to [Residential Estate].”

THE ONLINE PETITION created by residents calling themselves the Citizens of the Heart of Great Falls - http://tinyurl.com/nog62zy - is also supplemented with a Facebook page at

Ross said the residents are concerned that the increase in houses on the lot of land near Walker Lake Road will not only lead to more traffic congestion but also deteriorate the environment and the village’s well system.

“We don’t think the development is consistent with the other types of developments in Great Falls,” he said.

Rural Agriculture zoned land is meant to raise livestock and has a five-acre minimum lot, according to the Fairfax County website. Residential Estate, on the other hand, can be a minimum of 20 acres total for an entire cluster development.

“We have just filed an application with Fairfax County for the zoning of the 52-acre lot for a category 2-acre lot,” said Basheer and Edgemoore founder Diane Cox Basheer. “We are waiting for comments from Fairfax County and will meet with Great Falls Citizen’s Association Nov. 19. At that time, we will be presenting the community with that plan.”

She said the company looks forward to working with the citizens as well as the development. When asked more questions, Basheer said she will not state more for the time being.

Resident Melonie Sullivan said her own lot is a wildlife habitat with a number of animals like deer and foxes that cross the yard over the course of the day and night.

“A large upstream development will destroy that; I’m concerned,” she said.

Ross said it’s more than just a personal, not-in-my-backyard issue. To him, the proposal means another step to turn Great Falls into a suburban community like the communities that surround it.

“Wherever you buy a home, presumably, you chose it because of the character of the location,” said Sullivan.

She compared the current issue to the Cornwell Farm petition where more than 700 community residents signed an online petition, titled “Oppose Zoning and Cluster Development of historic Cornwell Farm Property,” over the course of several days in February. The developer withdrew its application the following week.

LONG TERM RESIDENT Colleen Sheehy Orme said there is also a safety concern because there are only two main arteries heading out of the village. She felt that more traffic would make it more difficult to leave if there was ever a major catastrophe or weather event.

“This special exception if approved does not just mean 20-something homes,” she said. “It means three to four cars per each of those homes totaling from say 70 to as many as 100 cars. More special exceptions and say five more developments of similar size could mean 1,000 more cars on already congested, country roads with limited sight visibility as well as maximizing our well and septic capacities.”

She said that chains like Starbucks — which she said she loved to go to — have changed traffic and parking in Great Falls in a way that is not desirable. To her, the increase in cluster developments would result in bigger changes for the village — a move away from the atmosphere that makes Great Falls different from its surrounding communities.

“I hear people say they want convenience, but the truth is there is a trade-off to living in this gorgeous, rural town,” she said. “We are simply not a convenient place to live and that's a price that many of us are willing to pay for the rural beauty that we both love and enjoy.”

Orme noted that the petition does not mean she and the residents do not want Basheer and Edgemoore to build the development. They just do not want the zoning — and the lot acreage — to change. She urged residents in opposition to contact state Del. Barbara Comstock and Dranesville District Supervisor John Foust to voice their concerns before the county makes a decision.

“Haydown Farms — aka, The Brooks Farm — has been zoned Rural Agricultural for years and changing it to RE, sets a precedent that leaves Great Falls vulnerable,” she said. “Our residents and our county officials need to unite to help us recognize a long term future for Great Falls.”