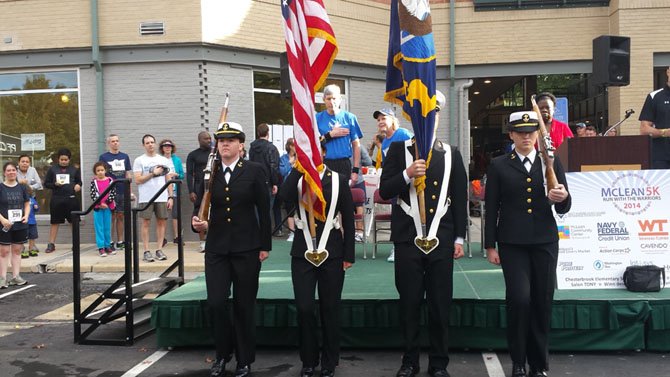 The Color Guard presents the colors prior at the awards ceremony following the race. Photo by Marissa Beale/The Connection

On Saturday, Oct. 4, the 2014 McLean Run with Warriors 5K took place in downtown McLean, attracting thousands of spectators. General Norton A. Schwartz, 19th chief of staff for the U.S. Air Force, spoke at this year’s event. “Our exercise is really about those who serve,” he said. “We especially honor our wounded warriors and those who have sacrificed more than we can ever contemplate.” The McLean Run with Warriors 5K is an annual event and the proceeds benefit the wounded warriors living at Vinson Hall Retirement Community. Currently there are two wounded warrior residents living at Vinson Hall. Additional wounded warrior apartments are expected in the near future.

The Wounded Warrior Transitional Housing at Vinson Hall was established in 2011 to meet the mental, physical and emotional needs of those wounded from wars in Afghanistan and Iraq.

Since 2011, the McLean 5K has raised more than $143,000 from race registration and corporate sponsorships for this project. The fun-filled race on Saturday was an effort to continue raising funds. The youngest runners were less than 8 years old, and the most senior runners were in their 70s. There were prizes and medals for the top female and male finishers in each age category, as well as prizes for school teams, corporate teams and parent and child teams. “We’ve done every race since it was the Firehouse 8K,” said David Danner, a former U.S. Marine. “We run to stay healthy and to support the wounded warriors.”

The top overall female and male finishers in Saturday’s race also won six-day vacation packages to Wyndham Hotel and Resorts. Ashley Kollme, 31, won first for women. “My father is retired military and I have a grandmother moving into Vinson Hall,” she said. The second-place female finisher was 11-year-old Emme Cate Heilburn, from Fairfax Station, who finished the course in 21:19. For males, the top finisher was 16-year-old Brendan Coffey, from McLean, who finished the race in 18:27, and Donovan Foley, 14, who finished second at 18:31. “I was excited,” said Foley about his win. “I didn’t know I was going to do that well.”

“I ran to support my job,” said Keven Deberry, 33, who works at Vinson Hall and has a father and brother who were in the army. “It was more fun this year; a bigger turnout.”

To see how you can donate to the Wounded Warrior Transitional Housing, visit the website at www.nmcgrf.org.