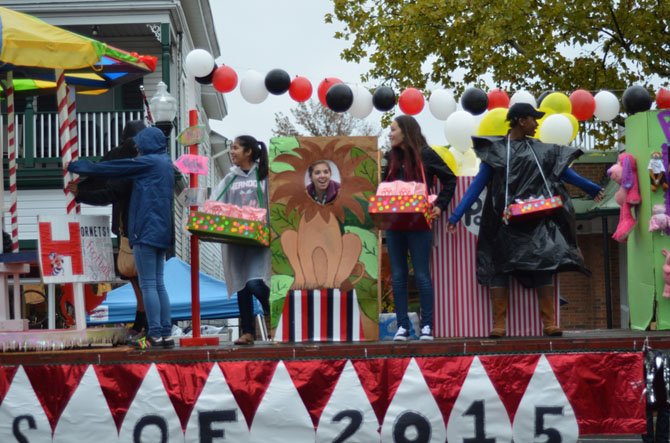 Members of the senior class of 2015 on their float in the Herndon Homecoming Parade held in downtown Herndon. The class of 2015 won the Richard F. Downer Theme Award. The parade was held despite wet weather. Photo by Ryan Dunn.

Despite rain and chilly weather, 50 units and nearly 1,500 participants marched in the Oct. 11 Herndon homecoming parade. Orchestrating the event was the Town of Herndon Parks and Recreation Department and many volunteers. 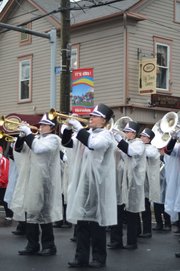 The Herndon High marching band Pride of Herndon walks past Jimmy’s Tavern on Elden Street in downtown Herndon during the Homecoming Parade. The band outperformed rainy weather and won the Major Robert E. Church Award for Best in Parade.

“It was a great opportunity for us to take on the parade,” said Cindy S. Roeder, Director of Herndon Parks and Recreation Department. “It brings out the community and is a uniquely Herndon event.” In the past, the Herndon Homecoming parade was operated by John Mossesso, who helped run the Herndon homecoming parade operation for more than 20 years.

Homecoming spirit was evident as people lined Elden and Lynn streets to cheer athletes, performers, politicians, community groups and the Homecoming Court. Serving as MC for the event was Artistic Director of NextStop Theatre Evan Hoffmann.

“I always love seeing what the kids do with the floats,” said Hendon resident Melissa Jonas. Jonas attended the event with her husband to cheer on her son who is a junior at Herndon High and a member of the school marching band.

At the house of Kevin and Kathy East on Elden Street, there was a small pre-show reception with guests and friends. “Homecoming is a wonderful occasion, it is wonderful for the high school students with the parade, game and dance,” said Kathy East. “Living on Elden Street, I feel like I have been part of every parade for 32 years.”

“It was another wonderful parade,” said Principal Bates. “It was great to celebrate all the wonderful things the Town of Herndon has to offer. The floats were great and the performers were awesome.” Videotaping the parade were volunteers with Herndon Community Television (HCTV), a non-profit, cable access PEG station based in Herndon.

“I am really excited to be a judge and be participating again,” said councilmember Stevie Mitchell. Mitchell is a 2003 alumnus of Herndon High, and he remembers when fellow students built floats at his parents’ house.

Trophies were presented to the first and second place winners in the Civic, Performing Arts, School, Show and Class Float categories. In addition, the judges selected the Richard F. Downer theme award and the Major Robert E. Church Best in Parade winners.

“It brings out the community, it is a unique Herndon event,” said Herndon councilmember Singh. After the parade, the Herndon High football team played their homecoming game against the Eagles from Alexandria’s Thomas A. Edison High School. Herndon Hornets lost the game, 17-0.