This Saturday's Oct. 25 Potomac Day promises to be bigger and better than last year. More than 90 vendors will be featured, children will have an opportunity to ride bigger rides, and a variety of food will be provided by local restaurants. Exclusively Entertainment will DJ for the day, the Retrospect Rock Band will be performing, and there will be awards for the Classic Car Show.

Cissy and Mac Grant, known by many as "Mr. and Mrs. Potomac."

"Potomac Day will be an amazing community event that provides residents the chance to visit with friends and neighbors as well as to chat with the vendors who run our neighborhood businesses,” said event coordinator Jennifer Matheson, from the Potomac Chamber of Commerce. “New this year are the ‘Quad BungeeJumpers,’ a swing ride that will thrill kids, a bigger wrecking ball, the climbing wall and more. Our Classic Car show will feature more automobiles and we will be giving the first Fire Chief's Award, President’s Award and People's Choice Award. Everyone who attends will have a chance to vote for their favorite car. It's going to be a great day. The memories that Potomac Day provides families are priceless. Each year, kids and adults truly love it as a day to celebrate our community."

Local residents will also be honored. Prior to Potomac Day, the Potomac Chamber of Commerce accepts nominations for the Citizen of the Year, Youth of the Year and Business People of the Year and then selects the winners of each category. It also selects the Grand Marshall of the Parade — a person or persons who have continually made giving back to Potomac.

This year's Grand Marshals are Cissy and Mac Grant. The Citizen of the Year is Barry R. Perlis, the Youth of the Year is Bullis senior Samuel B. Greenberg, and the Business People of the Year are Jill and John Phillips, owners of Squeals on Wheels.

Jill and John Phillips are Potomac Business People of the Year.

Cissy and Mac Grant, known by many locals as "Mr. and Mrs. Potomac," are honored to have been selected as the Grand Marshals of the Potomac Day Parade. Cissy Finley Grant is an award-winning journalist and reporter who is a fifth-generation Montgomery County resident. She was employed by the Montgomery County Sentinel,the Washington Evening Star, the Gaithersburg Gazette and still contributes to the Potomac Almanac. She loves talking to people and feels she has been "fortunate to meet so many wonderful people from U.S. Presidents to people on the street."

She has also volunteered for the Montgomery County Heart Association's Women's Board and founded and co-chaired the Heart-to-Heart Ball for 22 years. She also served on the Shady Grove Foundation Hospital Board when the hospital opened. She has delved into politics, public relations and authoring a cookbook and magazine articles. Her husband Mac has supported her in all endeavors while contributing to the Potomac community.

Perlis is known throughout Potomac as the vice-president of the Potomac Community Village, as a volunteer at Manor Care Nursing Home, president of the Ridgely Neighborhood Homeowner's Association, member of the board of directors and Investment Committee of JSSA, president of two synagogues and chairman of Save a Child's Heart, U.S. Operations, an organization that saves children from around the world with congenital heart defects. Employed as the COO of S. Friedman and Sons, he is in the process of seeking new interests and challenges as he moves toward retirement.

"In a community of so many accomplished people, it's a real honor to be recognized for my contributions. This honor inspires me to become even more involved in our community and I hope that having more time in the future will allow me opportunities to do so," Perlis said. 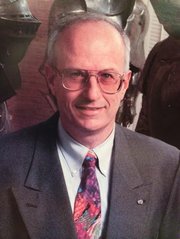 Barry Perlis is Citizen of the Year.

Greenberg never thought he would be chosen for the Potomac Youth of the Year: "I have never been part of a parade before, and I am honored to have been chosen." He was selected because he is outstanding in every walk of life. For the past three years, he has been named the Outstanding Scholar at Bullis as the student with the highest GPA in his class. He is the captain of his school’s “It's Academic" team — the first team in school history to win two on-air matches. He is also a musician who plays trumpet in the Bullis Concert Band and Jazz Band, a star athlete who pitches and plays first base for his baseball team and a student tutor, Bullis Ambassador and member of the National Honor Society. He has also volunteered in Costa Rica at a summer camp for underprivileged children, served as a "Band-Aide" with the Interplay Company Band, a music program for cognitively/ and or physically impaired adults, tutors for the Aristotle Circle Peers Tutor Company, and is the editor and writer for the sports website sportsranks.net.

Business People of the Year Jill and John Phillips have been involved in every aspect of Potomac life. They were both formerly in the Army, but retired to Potomac and bought an older home with a large yard for their five children. Jill Phillips thought it would be a good idea to acquire an alpaca to help "trim the lawn." As she collected more animals — goats, chickens, ponies — they decided to launch "Squeals on Wheels," a portable miniature petting zoo with pony rides.The concept was almost an instant hit, and they have been in business ever since.

Their business includes birthday parties, corporate events, senior centers and nursing homes, festivals, community events, fundraisers and more venues. Their family has participated in the Potomac Day parade almost since the beginning — and most of the family will once again be in the parade. "It is a huge honor for us to be chosen as Business of the Year by the Potomac Chamber of Commerce," said Jill Phillips. "In recognizing our family business, you are honoring the importance of being engaged, giving back and sharing our gifts with the community. It is a privilege to operate a business in Potomac and our purpose is to share our love of animals with our home town and to bring joy to children and families."

Not only do they manage a thriving business, but they are also involved in volunteer work for many Potomac organizations. They are helping establish the Potomac Community Village; Jill Phillips sits on the board of the Potomac Chamber of Commerce and the West Montgomery County Citizens Association; John Phillips is on the board of the Brickyard Coalition. They often donate their petting zoos to the Armed Forces Retirement House of Washington D.C., for fundraisers for Luke's Wings, the Potomac Mom's Club, the Cabin John Volunteer Fire Department, the River Falls 4th of July Parade, the Potomac Community Center, the carnival day for Big Train Baseball and for the Collingswood Nursing Center.

They have appeared on "Wife Swap" and will soon appear in a Discovery broadcast.