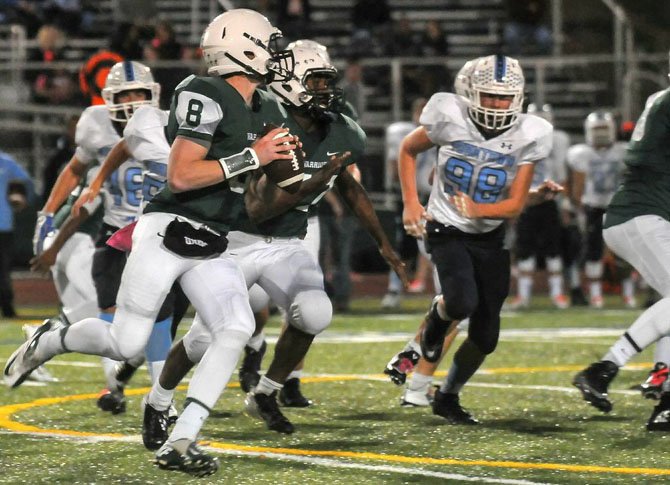 Wakefield senior quarterback Riley Wilson looks down field during the Warriors’ Oct. 17 game against Yorktown. Wilson transferred from Yorktown to Wakefield prior to the 2013 season. Photo by Louise Krafft.

It wasn’t that long ago, Bruce Hanson recalls, that his Yorktown football team beat the Wakefield Warriors so soundly that the Patriots had to make an effort to stay under 70 points.

That night, Sept. 9, 2011, the Patriots defeated the Warriors 68-0 at Yorktown’s Greenbrier Stadium. Yorktown pulled offensive starters out of the game in the second quarter, led 55-0 at halftime and had seven different players score a touchdown.

Yorktown won its first 12 games that season before losing to South County in the Northern Region championship game. Wakefield, on the other hand, finished 1-9.

The defensive coordinator on that Yorktown team was Wayne Hogwood, a 2000 graduate of Wakefield High School who spent eight seasons learning under Hanson as an assistant coach. Hogwood helped the Patriots to a 33-4 record from 2010-2012, including a pair of Northern Region championship game appearances.

Three years after Yorktown’s 68-point drubbing of Wakefield, Hogwood was on the opposite sideline when the Patriots traveled to Wakefield High School to face the Warriors on Oct. 17. Hogwood, now a second-year head coach at his alma mater, had led Wakefield to a 5-1 record, the program’s best season in decades, entering Friday’s game against his mentor, Hanson, and the 3-3 Patriots.

Head coach Wayne Hogwood has led the Wakefield football program to a 5-2 record this season.

Wakefield, a program that hasn’t had a winning season since 1983, opened the game like a team that belonged on the same field as tradition-rich Yorktown. The Warriors drove 80 yards in 14 plays, capping a 6-minute, 21-second drive with a 2-yard touchdown run by Kareem Hall.

Yorktown defeated Wakefield 44-21. The Warriors showed glimpses of breaking through against the Patriots, but not enough to keep Yorktown from extending its winning streak over Wakefield to 19 games.

While the outcome wasn’t a nail-biter, the game had a different feel to the Patriots. Hanson and his players agreed this Wakefield team was more competitive than Warrior teams of the past.

“[Hogwood has] done such a great job here,” Hanson said. “They were like a real football team. ... This game, I felt, was [competitive] the whole time. I never relaxed one minute over there. Not one minute. ... It’s unbelievable. It’s the [best] coaching job [in] the region already. They don’t have to win another game.”

One week before Wakefield’s loss to Yorktown, the Warriors overcame a 15-point fourth-quarter deficit to beat Falls Church, 26-25, on a last-second 24-yard field goal by Ben Kline. The victory improved Wakefield’s record to 5-1. It was the first time since 1985 that the Warriors overcame a two-touchdown deficit in the fourth quarter, and the first time since 1987 Wakefield won five games in a season.

Hogwood led Wakefield to a 3-7 record in his first season as head coach. This year, he can notice a difference in the players’ attitudes during their successful start.

“They’re more confident,” Hogwood said. “I don’t think last [year’s team], or any Wakefield teams in the past, would be able to respond to a game the way we did against Falls Church last week and come back [from] down 15 in the fourth quarter. Because we’re able to do some things like that and we stick it out and we fight together as a team for four quarters, nobody gave up [against Yorktown] tonight. There’s always an inkling in the back of your mind — hey, we’re a tough team ... and we can make anything happen at any time.”

“Wakefield used to be a doormat,” he said. “We’d come in here and our goal would be to keep the score down. We’d put our JV guys in [at the] beginning of the second half, middle of the third quarter. We had our starters in to the end of [tonight’s] game, if that means anything. Big props to everybody at Wakefield. They’re getting better and it shows with their record.”

Storrs was a big reason Yorktown was able to take control of Friday’s contest. His 2-yard touchdown run gave the Patriots a 10-7 lead with 10:03 remaining in the second quarter. On the next play from scrimmage, Storrs returned an interception 27 yards for a score, extending Yorktown’s advantage to 17-7.

Yorktown senior Jack Storrs reached the end zone on offense and defense against Wakefield on Oct. 17.

Moments later, Yorktown’s Austin Kasmer blocked a punt and recovered for a touchdown. Just like that, the Patriots led 24-7.

Wakefield didn’t give up, however, answering with a Leon Young 3-yard touchdown run on its next drive, cutting the Yorktown lead to 24-14.

“It shows just how [good] of a job Wayne Hogwood has done,” Yorktown quarterback Joe McBride said, “and it shows how talented their kids are.”

A big reason for Wakefield’s success has been the play of senior quarterback Riley Wilson. The 6 feet 4-1/2 and 195 pound signal caller transferred from Yorktown to Wakefield prior to his junior season. Wilson felt quarterback was the position that would give him the best chance of playing football at the college level, so he transferred to the South Arlington school for an opportunity to start as a junior.

On Friday, he completed 11 of 23 passes for 219 yards, with one touchdown and one interception against his former school.

“I try not to make it some emotional game, but I definitely prepared through the whole week expecting to bring my ‘A’ game,” Wilson said. “It’s a real big adrenaline rush. All the people in the crowd are my best friends since I was in kindergarten. There was a lot of pressure on me, but I knew I had to step up. I wasn’t going to let it smash me. I wasn’t going to let the pressure [knock] me over.”

Wakefield’s Young carried 18 times for 69 yards and a touchdown.

Yorktown’s McBride, who completed 16 of 26 passes for 225 yards, with two touchdowns and one interception, also noticed a change in atmosphere surrounding Wakefield football, including more Warrior fans in the stands, something he attributes to a pair of former Patriots.

“[Wilson is] changing the culture,” McBride said. “[Wilson] and Wayne are changing the culture of this school. This is a new stadium, it’s a new fan base. Wakefield kids wouldn’t even show up to a football game [in the past] if you [got] in free with a Whopper. ... Riley has done amazing things, Wayne has done amazing things. It just shows that even though it takes time to change a culture, it can be done.”

Hogwood played quarterback at Wakefield and set the program’s single-season passing yardage record, which stood for 12 years. He also played collegiately at Division III Shenandoah University, where he led the program to the 2003 Dixie Conference championship. Hogwood said his ties to Wakefield have helped him draw athletes to the program who might not have played, otherwise. Hogwood said getting kids to join the team is “80 percent” of turning around a program.

While the Wakefield varsity is experiencing success, the school’s freshman program is 6-1, providing additional hope for the future.

Wakefield running back Leon Young carries the ball against Yorktown on Oct. 17.

“This is our second year as a staff over here,” Hogwood said. “I don’t know of anybody that has turned a program from 0-10 to 10-0 in two years. It’s a process, it’s a long haul. ... It’s slowly starting to come around. We expect to be good and get better because we’re going to do things the right way, but nothing is going to happen overnight.”

Yorktown’s head coach and players weren’t the only ones showering Wakefield with praise following Friday’s game. While Hogwood was answering a reporter’s questions outside of the locker room, a veteran referee stopped as he was leaving the building to speak with the Warriors coach.

"I'll tell you one thing, I've been to Wakefield before,” the referee told Hogwood. “This is the best team I've ever seen (here). You're doing a super good job."