Families from around the area visit Herndon farm park. 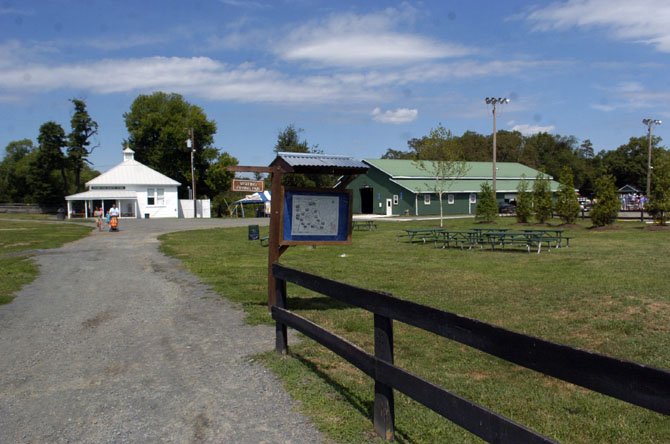 Hundreds of families took the advantage of mild fall weekend weather to attend the Frying Pan Farm Park’s Farm Harvest Days held Oct. 18 -19 in Herndon. Fall was historically a busy time on farms, and visitors had the opportunity to watch the cider press in action, milk a goat or a cow, shell corn, and peel apples. “We had a lot of families come visit,” said Meriel Carney, a resident of Herndon and student at Rachel Carson Middle School. Carney has volunteered at Frying Pan Farm Park since she was 8.

Today, Frying Pan Farm Park preserves and interprets a 1920s through 1950s farm, agricultural process, rural community life and landscape for the educational, cultural and recreational enrichment of citizens and visitors of Fairfax County. Many families took the opportunity to meet the farm animals and see traditional farm demonstrations. “When I first moved here, I was lost in suburbia, Frying Pan Park has been such a nice outlet for us,” said Jason DeWitt, a resident of Ashburn. DeWitt brought his daughters Maisie and Rosie with him to visit the Frying Pan Park. 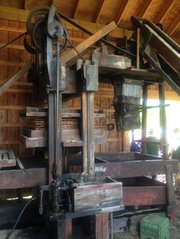 During the farm harvest days at Frying Pan Farm Park in Herndon, the antique cider press was put in operation to display how apple cider was made.

THROUGHOUT THE YEAR members learn about sheep, cattle, goats, swine, and poultry. The club focuses on basic animal science, livestock showmanship, and leadership. Members participate in a variety of club and park sponsored events, county and state 4-H competitions, and livestock shows like the annual 4-H Fair. Meetings are held the second Tuesday of the month at 7 p.m. and new members are always welcome.

Food vendors attended the event, which also included a blacksmith demonstration by members of the Blacksmiths' Guild of the Potomac Inc., at the Moffett Blacksmith Shop. Originally located in the nearby town of Herndon, the blacksmith shop stands at the farm entrance across from the kitchen garden. “The purpose of the event is to educate the public about harvesting techniques used in the era of the 1920s,” said park employee Antonio Mirzaiee.

Some surprise visitors were relatives of Clinton P. Jones, former owner of the antique cider press donated to Herndon Frying Pan Farm Park. “It is nice to come back and see the press,” said Judy Jones Bell, granddaughter of Clinton Jones. The Jones family donated the cider press to the Park Authority in 2001. They also donated an orchard sprayer, a John Deere “B” tractor that was used to power the cider press, a wheel grinder, and artifacts related to the press. In 2003 park mechanic Alan Stull repaired the tractor, and the cider press and other equipment arrived at Frying Pan in 2004. Although the cider cannot be sold, it is an opportunity to display the cider making process. “It was a great fall celebration,” said park manager Yvonne Johnson.

WELCOMING GUESTS to event was Cate Henderson, a representative with Friends of Frying Pan Farm Park. In 1960, Fairfax County’s farming industry was waning, and a movement to preserve farm life for educational and historical purposes was started in the Floris community by a group of civically minded citizens. That group of visionary citizens evolved into the present day Friends of Frying Pan Farm Park. The school system gave the four-room Floris schoolhouse to the Park Authority, and in 1961 the Park Authority Board purchased most of the nearby Kidwell Farm property, 37.3 acres at $1,500 per acre, to create Frying Pan Farm Park. “This event reminds the public farming is about community and bringing people together,” said Henderson.