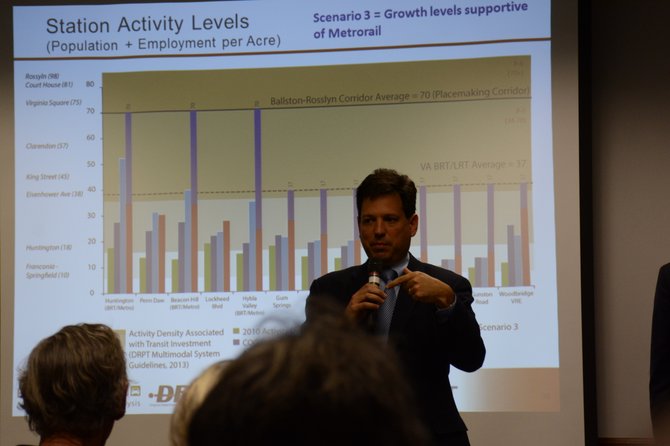 Extending the Yellow Line to the Route 1 corridor isn’t exactly building another Rome. But it may take that long.

The Virginia Department of Rail and Public Transportation (DRPT) has been holding public meetings announcing the results of a year-long comprehensive study on how to improve overall transit and land use between Huntington and Woodbridge.

Route 1 is a federal highway, Del. Scott Surovell reminded people at the third such meeting on Oct. 9 at the South County Center on Route 1, so completing such a study is necessary to be eligible for federal backing for redevelopment plans.

“We passed a transit bill last year, the largest tax increase in VA history, to help buy the land,” said Del. Mark Sickles. “It’s the ultimate state-local-federal project: All three levels of gov have to work together. Not any one can do it on their own.”

“I think we need to get more money from NVTA (Northern Virginia Transportation Authority),” said Surovell. “We need to get the feds to step up to the plate, not just the Federal Transit Administration. We need to get Fort Belvoir to the table. They play a big role in what's going on around here, in terms of our traffic growth and transit growth.”

The first is Bus Rapid Transit, oriented in center lanes of Route 1 all the way to the Occoquan River. Their projected timeline showed this option operational by 2026.

“It’s the more cost effective alternative and can be implemented more quickly and efficiently,” said Mumford.

The second part of the hybrid is extending the Metro Yellow Line to Hybla Valley, operational by 2040.

“This has a higher ridership and higher potential to attract the economic development that's planned for the northern part of the corridor,” Mumford said. “They're good for different reasons.”

“I’m not very happy about the time frame,” said Surovell, “but I am happy about what they’re recommending. It would help make our community the kind of place people want to live for the next 50 years.”

Edythe Kelleher, executive director of the Southeast Fairfax Development Corporation, was also at the meeting. “I share the reactions from many community members, that they would like to see transit come more quickly than 2040,” she said. “When there’s investment in transit infrastructure, the property owners start to believe it.”

The DRPT still needs to make its final recommendation to an executive steering committee at the end of October. Then the project can go forward to the Board of Supervisors.

“We still have some work to do, but it is moving in the right direction,” said Senator Linda “Toddy” Puller. “I look forward to us all being able to move about our community in a more comprehensive way and without as much traffic as we’ve had.”

Lee District supervisor Jeff McKay referenced the numerous previous studies collecting dust in his office when he took over. “Hopefully this is the last study we see,” he said, “and the first one we fully implement. The onus on us to make sure that happens.”

“This is not just about what the road looks like, not just about the transit options,” said Surovell. “It’s about our quality of life, property values, how our community looks.”

To see the video of the meeting and find out more information on the study and the DRPT recommendations, visit http://route1multimodalaa.com/participate-in-public-meeting-3/.