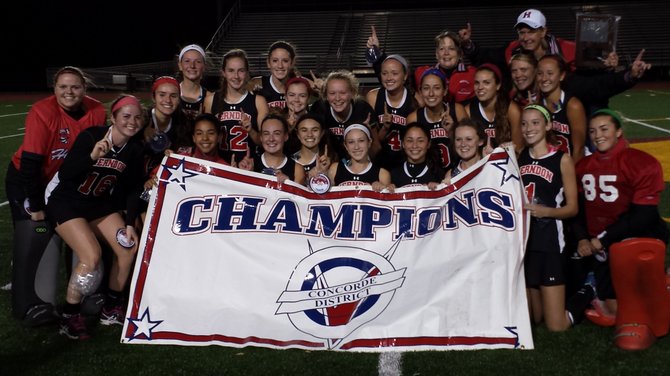 The Herndon field hockey team won the Conference 5 championship on Thursday night with a 3-2 victory over Westfield at Oakton High School. Photo by Jon Roetman.

Herndon head coach Mary Miller and her two assistants grabbed one another in a spirited group hug as Hornet players rushed the field following the conclusion of the Conference 5 tournament championship game at Oakton High School.

As the on-field party continued, players talked with reporters, students chanted “I believe that we just won!” and Miller snapped a picture of the scoreboard, memorializing one of the greatest victories in the history of the Herndon field hockey program.

Herndon, the No. 3 seed, captured the Conference 5 championship with a 3-2 victory over defending state champion and No. 1 seed Westfield on Thursday night. Stone scored all three Herndon goals and the Hornets thwarted a Westfield penalty corner in the final minute to take home the title --- and earn acknowledgement on the field hockey banner in the school gymnasium.

“We now get to put our year up in the gym,” Stone said. “That’s what we wanted --- we wanted to make history.”

It was Herndon's first conference/district championship since 1979 (no district tournament back then).

Stone, a midfielder, played a major role in the Hornets’ making of history Thursday night, producing a hat trick. She scored the game’s first goal with a reverse chip with 23:56 remaining in the opening half. Stone scored again less than three minutes later, increasing the Hornets’ advantage to 2-0 with the help of a nifty set up by Penn commit Sofia Palacios.

Herndon led 2-1 early in the second half when Stone found the back of the cage for a third time, scoring off a penalty corner with 23:40 remaining in the contest.

“She’s just a tremendous, tremendous player,” Miller said. “… She’s going to [Louisville], she’s a DI player, but she’s playing at her high school. She plays with her friends, [and] she’s playing with kids whose abilities aren’t necessarily the same, but she just plays with them. She can play with anybody. The kids like her and she’s got a great attitude --- all those intangibles that go with her.

Westfield cut the Herndon lead to 3-2 with 16:08 remaining in the second half when sophomore forward Olivia Markert scored her second goal of the evening. The Bulldogs had opportunities to tie the score, including the penalty corner in the final minute, but came up empty.

“You know what, they’re a great team,” Westfield head coach Starr Karl said. “They play really hard. I can’t take anything away from them. They wanted it. They played hard. We wanted it to, we just didn’t [capitalize].”

Westfield defeated Herndon 5-4 during the teams’ regular-season meeting on Oct. 8. The Hornets held a 4-2 advantage in the second half, but surrendered a trio of late goals, including the game-winner in the closing seconds.

Palacios said Westfield’s penalty corner in the final minute Thursday brought back memories of the Hornets’ gut-wrenching regular-season loss to the Bulldogs.

“When they had a corner with 30 seconds left, [I had a] flashback to last time,” Palacios said. “I’m like, this cannot happen again. … When we got it out [of the circle], it was one of the best feelings ever.”

The regular-season loss to Westfield snapped a 13-game winning streak for Herndon. After bouncing back with a victory over Oakton, the Hornets lost their regular-season finale to Chantilly, dropping Herndon to the No. 3 seed in the tournament and forcing the Hornets to play in the quarterfinal round (the top two seeds in the six-team tournament receive a first-round bye and an automatic regional berth).

Herndon beat Oakton 6-1 in the quarterfinals on Monday and knocked off Chantilly 2-0 in the semifinals on Wednesday. Miller said being forced to play in the quarterfinal round helped the Hornets regain some confidence. She also said the team benefitted from its performance against Westfield in the regular season.

“I hope we get to see [Herndon] again,” Starr Karl said. “I think our conference was definitely the strongest conference this year. It’s exciting because that’s never been the case.”