Arbors of Chantilly Gets a Thumbs-Up
Votes

Arbors of Chantilly Gets a Thumbs-Up 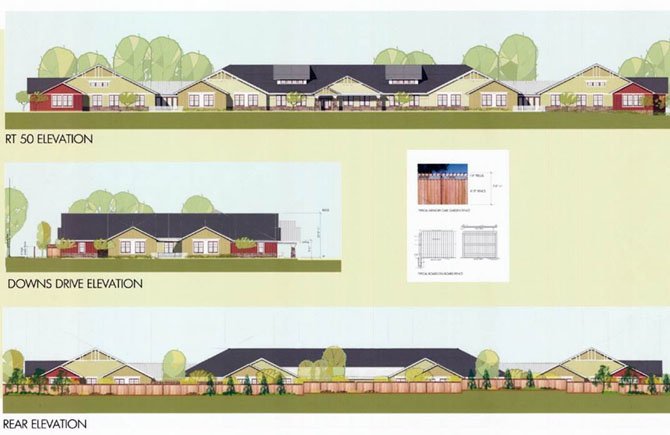 An artist’s rendition of the assisted-living facility proposed for construction in Chantilly. Photo by Bonnie Hobbs.

The Arbors of Chantilly would be off Route 50 and Downs Drive.

Chantilly — It’s on to the Board of Supervisors now for a proposed, elder-care facility in Chantilly. The Fairfax County Planning Commission gave it a thumbs-up last Wednesday, Oct. 22.

“The Planning Commission overwhelmingly approved this facility because it was badly needed in Fairfax County and all the key traffic concerns stated by the commissioners were met under Virginia law,” said Sully District Planning Commissioner John Litzenberger. “Several of the ‘what-if concerns’ expressed by some local citizens were researched, but were found to be not applicable.”

Artisan Land Group LLC hopes to build The Arbors of Chantilly at 13622 Lee Jackson Memorial Highway, off Downs Drive, which runs alongside a gas station on Route 50 west. But to do so, it needs a special-exception permit from the county.

Traffic counts for this 48-unit facility are projected to be less than if that site were developed with the 12 homes that could be constructed on it by right. Two entrances off Downs are planned, and county staff is recommending approval, subject to certain development conditions.

However, the nearby residents are worried that people leaving The Arbors would cut through their community to reach Route 50. They stressed that their neighborhood, Chantilly Estates, is old, with narrow roads and no sidewalks, plus children and elderly, handicapped and special-needs residents who are often outside.

So in response to their concerns, the applicant has agreed to forbid all vendors from making a right turn leaving the site, so they can avoid driving into the neighborhood. Signs to that effect will be placed on site and on Downs Drive, and residents will be given a phone number to call if anyone violates this policy.

Furthermore, the applicant will also comply with a development condition to limit deliveries into the site. It states that, except in the case of an emergency, “best efforts will be used” to ensure that no deliveries to the Arbors of Chantilly will be scheduled between the hours of 10 p.m. and 6 a.m.

“No other substantive changes are proposed,” said Billy O’Donnell, senior land-use coordinator with the county’s Planning and Zoning Department. “Staff continues to find that the proposal is in conformance with the Comprehensive Plan and the Zoning Ordinance, as conditioned.”

The view from Downs Drive.

During a Sept. 18 public hearing, residents also complained that the service road by the nearby gas station is “dangerous and often blocked.” That’s because many drivers – including those in large trucks – park there routinely while they go into the gas station. So people drive through Chantilly Estates to get out, instead of using the service road to reach the traffic light at Chantilly Road to get to Route 50 east.

But, said Litzenberger, “County staff emphasized that the timing of the traffic lights at the Staples store and Chantilly Drive will enable a two-minute break in traffic to occur on Route 50, which is plenty of time for a large number vehicles to merge onto Route 50 from Downs Drive.

Besides that, Litzenberger said county staff expects the service-drive issues to be cleared up in less than a year. The Arbors of Chantilly owner said it’ll take two years to build the facility, so full use of the service drive will be in place when it opens.

In the end, the Planning Commission voted 10-0 to approve Artisan’s proposal. One member not present for the public hearing abstained and another was absent. The issue is slated to go before the Board of Supervisors on Tuesday, Dec. 2.