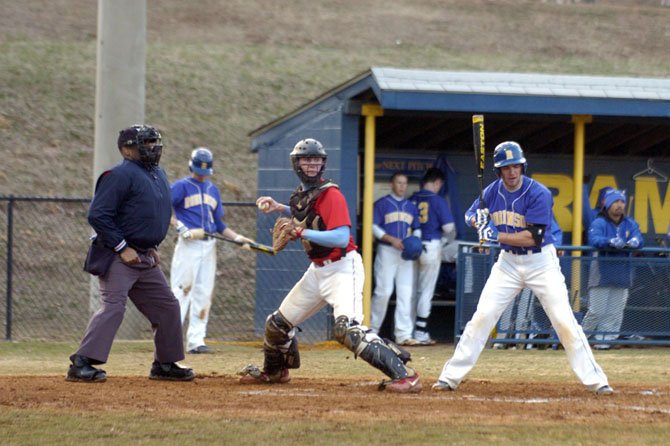 *Editor's note: Mitch Blackstone committed to Cornell University shortly after the The Connection posted the original version of this Q&A.

As a sophomore, Blackstone received first-team All-Liberty District honors. He batted .444 with six home runs, 14 doubles and 22 RBIs. As a freshman in 2012, Blackstone played with his older brother, Kent, who was a standout shortstop for the Statesmen and went on to play for New Mexico State before transferring to George Mason.

Now a senior, Mitch Blackstone prepares for his fourth season with the Marshall varsity baseball team. On Wednesday, he committed to play for Cornell University.

Blackstone recently participated in Q&A via email with The Connection.

*Connection: What made Cornell the right choice for you?

Blackstone: I loved everything about Cornell both academically and athletically. I felt a good connection with the school, and I believe it best represents me as a person. Also, Cornell's Head Coach Bill Walkenbach is a great person that I could definitely see myself being successful for.

*Connection: Will you remain at catcher or is there a plan to move you to a different position?

Blackstone: At the moment, the plan for me is to play either catcher, first base, or center field. Depending on what the team looks like freshman year will most likely determine where I will be playing. For me, it does not matter where I play; I would just like to get on the field as early as I can so that I can help my team win.

*Connection: Your older brother, Kent, played at Marshall High School before playing Division I baseball at New Mexico State. Has he helped you with the recruiting process?

Blackstone: He has now transferred to play at George Mason University, and he has been a huge supporter in my college recruitment process and has been a big help considering he had to go through the same process.

*Connection: At what age did you start playing baseball? Have you always been a catcher?

Blackstone: I began playing when I was around 2 years old, and I have always had catcher as my primary position.

*Connection: You're a senior, correct? How do you feel about your game now compared to when you were a freshman?

Blackstone: I am a senior now, and I feel that my game has been accelerated an incredible amount since beginning at Marshall in 2012. I felt like I have picked up a large amount of information about the game in the past three years.

*Connection: How much time do you spend working on your baseball skills in the offseason?

Blackstone: On average, I would say I train my baseball skills usually around 20-25 hours per week during the fall and winter.

*Connection: What is your favorite baseball moment from your first three years at Marshall?

Blackstone: I have two favorite moments at Marshall. First, is taking throw-downs with my brother Kent at every practice and in-between every inning in games freshman year, and the other is hitting the game-winning HR off Edison in the conference championship this past spring to win the Conference 13 title.

*Connection: What is your favorite food?

Blackstone: Metallica, because their songs always get my adrenaline going before games and during workouts.

*Connection: What is your favorite movie? Why?

Blackstone: “The Dark Knight,” because I am a huge Batman fan.

*Connection: What is your favorite hobby outside of baseball?

*Connection: What location is the farthest you have traveled from the Washington, D.C. metro area?

*Connection: Are you a pro sports fan? If so, who are your favorite teams?