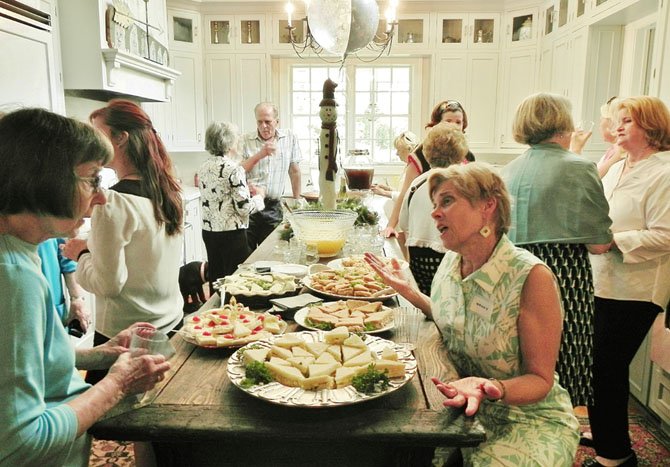 The tea was held at the large antebellum meeting house called Langley Ordinary at 1101 Chain Bridge Road that was recently restored by honorary 2014 Homes Tour host Doug DeLuca and his business partner, Matt Bronczek. The house is now a National Historic Trust building and is on Fairfax County’s list of historic sites. Both DeLuca and Bronczek were present, as well as Woman’s Club officers, members and friends.

The four houses on December’s tour are all custom designs built on earlier home sites. Each house will be decorated with the holidays in mind and will highlight family life in McLean. In addition, Trinity United Methodist Church, at 1205 Dolley Madison Blvd., will simultaneously host a MarketPlace, offering gifts and holiday items, a lunch and snack concession and an auction of chances on a variety of merchandise and services.

Woman’s Club members have been working on tour preparations since February, when they began soliciting advertisements for the tour brochure/ticket book. Additional efforts over the summer included selection of the homes, brochure preparation, publicity arrangements and plans for decoration.

All proceeds will be donated to local charities and nonprofit organizations, such as Share, Inc., Alternative House, the McLean Project for the Arts (The Children’s Outreach), Claude Moore Colonial Farm, the McLean Volunteer Fire Department, Fisher House and the McLean Symphony, as well as used for scholarships and education.

The tour will take place on Thursday, Dec. 4, from 10 a.m. to 3 p.m. Tickets will be available in early October at local businesses, including Mesmeralda’s Gifts of McLean, Karin’s Florist of Vienna and Great Dogs of Great Falls, or may be obtained on the tour day at one of the featured homes.