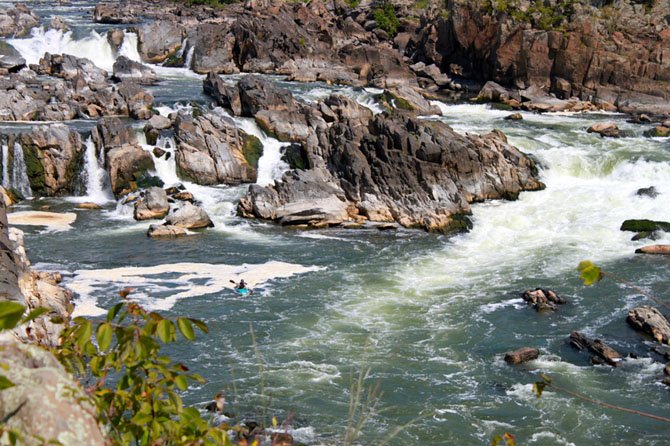 A kayaker paddles below the falls near an overlook at Great Falls Park. Photo by Reena Singh.

Every year, a handful of people fall victim to the surging, powerful waters of the Potomac Gorge.

According to experts, most accidents on the white waters near Great Falls Park are from visitors rather than experts kayaking or rafting the rapids.

Visitors who come to Great Falls Park are surrounded by signs warning them about the dangers of getting into the water. Even getting in ankle-deep is frowned upon at the park. Firefighters at Great Falls Volunteer Fire Station are trained to rescue anyone who was whisked away by the waters.

“On average, we have about seven drownings,” said Station 12 Commander Michael Allen. “We just ran a guy about four weeks ago who, it turned out, had a head injury he ended up dying from.”

He said the station is usually called to make a water rescue several times a month.

He said the station’s success rates have a lot to do with firefighter swift water certification and mandatory training every quarter. However, he said that for many who fall in at the S-turn around the falls, the survivability rate is very low.

EVERY WEEKEND IN AUGUST, the station has been at Great Falls Park with their equipment to show to the public and raise awareness about how dangerous the waters are.

“If we can prevent the 911 call, that’s what we want,” said Allen. “That water is incredibly unforgiving.”

To a kayaker, the Potomac Gorge is broken into two parts: Class 5 being the waterfalls and Class 3 below the falls. Even paddlers who have kayaked Class 5 rapids take safety precautions on the water.

“Obviously, you never go out there alone,” said Jordan Poffenberger, Fairfax. “When you run it the first time, you go with someone who knows it. You actually get out of the boat and scout it. Every time you go down a waterfall, it’s not a thrill. Every single time, it’s a calculated risk.”

Poffenberger knows what he’s talking about. The 20-year-old kayaker is a gold medalist at the World Freestyle Championship

He has been paddling since he was 5-years-old and has been on the national circuit for about seven years.

“I started pretty young,” he said. “This is one of the biggest paddling communities in the world.”

He has memories of hiking with his family at Great Falls Park and paddling the rivers as a child.

Although he is experienced, he said paddlers always wear, personal floatation devices, helmets and carry rope in case they need to pull a fellow paddler out of the water. For new courses, they’ll carry extra rope and a kit with pulleys and carabiners.

“You never see a professional paddler out there saying he’s risking his life,” he said. “If there’s any more than a 0.001 percent chance that I’m risking my life, then I won’t run it.”

That’s not to say that accidents with kayakers do not happen. Poffenberger’s own estimation was that one kayaker in the area falls victim to the Potomac’s raging waters every five years - a number that he says is high.

JUST A YEAR AGO, professional paddler Shannon Christy died before the 2013 Great Falls Race, a part of the Potomac River Festival. That year, the race was canceled to hold a memorial service in her honor.

Scott Coulter, owner of Outdoor Excursions in Maryland, said he remembers when he used to paddle the falls.

“The thing with kayaking the falls is that you’re playing with fire because you never know what will happen,” he said. “A slight change in the water level could change everything. You could go 100 times and never have an issue.”

Still, he is convinced that the majority of deaths that have happened due to drowning is because the person was not wearing a personal flotation device. Most likely, he echoed from other experts, they were visitors who wanted to see how far they could wade in the water.

He has been leading kayak and rafting excursions on the Potomac River since 1985. While he does not lead excursions over the falls, he said the day trips to the Potomac Gorge have gone well so far. Before a trip, he teaches participants how to react if they fall in the river.

“We’ve actually flipped rafts going up the river, but we’ve always had a safety boat there just in case something happens,” he said.

He said the falls appeals to kayakers looking to take the next step in their paddling experience.

“It’s there, it takes skills and it’s a challenge,” he said.