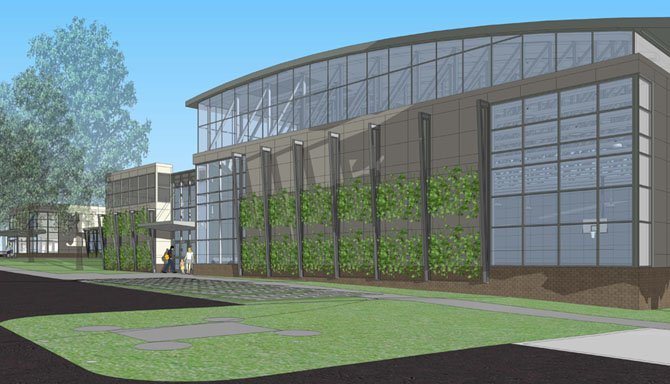 Even while Vienna residents are enjoying their current Community Center, plans are moving forward on its renovation and enlargement, plus construction of a 9,115-square-foot gym to the west side of the existing building.

The 48-year-old facility is 28,814 square feet in two stories and is constantly in use. But it needs more parking, a new roof, a gym large enough for league play, high-tech wiring for laptops, plus new electrical, heating and air-conditioning systems. Classroom floors and walls must also be repaired.

A December 2013 bond issue is funding the bulk of the work; and during an Aug. 18 work session of the Vienna Town Council, Parks and Recreation Director Cathy Salgado and architect Gregory Lukmire presented an update on the project.

“Over the summer, we’ve been busy working on the site plan,” said Salgado. “It’s a work in progress. Our goal is to get some consensus on [where things should be located]. By Oct. 1, we want to have it ready for the Planning Commission’s review.”

“We’ll also tell you the issues we’re facing,” Lukmire told the Council members. “This evening, we’ll primarily focus on the gymnasium and its entrance.” He also discussed parking and the Community Center’s new floor plan.

“The NVRPA [Northern Virginia Regional Park Authority] parking lot has about 90 spaces,” he said. “You [also] have 32 spaces in the two lots in front of the building and, at times, it’s crowded. So we’ll have a new parking lot where the bike trail was. The NVRPA will have an 18-foot trail and we’ll have 127 parking spaces in front of the building.” The current proposed total of parking spaces is 190.

“The Park Authority is OK with the movement of the trail, and we added a walkway from the trail to the Community Center entrance for safety,” said Salgado. “And as the trail crosses Park Street, we’ll be able to do safety enhancements and help the bicyclists slow down before they get there.”

REGARDING THE BUILDING’S NEW LAYOUT, Lukmire said the Community Center will have two main entrances in the northeast corner of the building, leading into a new, 900-square-foot lobby. “The existing lobby would be gutted and renovated into new, administrative-office space,” he said. “And in the new lobby, staff would be able to monitor who’s coming in.”

People will enter the building from both Cherry and Mill streets so they may use both nearby parking lots. And the existing, U-shaped, drop-off area will be retained.

A new, high-school-sized gym will have bleachers and two, 4-feet-wide walking/running tracks (with two lanes) around the perimeter. It’ll be striped for basketball, volleyball and badminton courts, and there’ll be two electronic scoreboards.

Storage for gym and theater uses is planned to the rear of the gym. There’ll also be a new, central kitchen where the old theater-storage was, with access to the gym so refreshments can be served. The current kitchen will be converted into storage for the auxiliary gym, a custodial closet and a staff shower facility.

The total addition to the Community Center’s north and west sides will be 13,888 square feet and will also allow space for future expansion. The entrance to the existing gym will be via a T-shaped corridor going to it and also to the lobby. The second-floor layout isn’t changing, but it’ll have a new electrical system and revamped classroom space.

“A new hallway will connect the lobby to the new gym,” said Salgado. “And classroom windows plus a glass corridor will let in lots of light.”

However, added Lukmire, “In the corner of the new gym, its storage area is over the property line for the Fairfax County school system by 3 feet. But if we can get a 10-foot easement [from FCPS], we could get what you want in the gym.”

“We hope to have a budget estimate of the gym and renovation work, plus the site work for build-out of the site in 10-20 years, by Sept. 15, when we get together again,” Salgado told the Council. “It’ll include costs for the renovated electrical and plumbing work.”

AS FOR THE LAYOUT, she said, “We moved things around several times, and this is the best configuration we could come up with. We’ve been doing staff review with Planning and Housing, the Department of Public Works and our staff and making revisions as we go.”

Basically, said Lukmire, “You have a small, oddly shaped site and you want a lot of things on it. And we’re trying to do that without destroying the site. We also have a landscape plan, including a tree-lined bike trail.”

Furthermore, said Salgado, “Residents have also told us what they want on that site. For example, skateboarders want a temporary skate spot that we’ll use later on in the future. And we still want to retain that park-like atmosphere.”

Noting that the 35-foot-high gym would be equivalent to three stories, Lukmire said they want to “put in some glass and plantings against it. We’d also like a growing trellis outside the building so it can be a green building.”

A glass corridor will run along the north wall of the existing building and connect the new gym with the new lobby, and there’ll be a handicap ramp. “The gym is 80 feet across, so we’re trying to introduce natural light,” said Lukmire. “We’d also like to introduce wood into it so it feels like a park-and-rec building.”

Groundbreaking is anticipated in April 2015, with expected completion a year later.