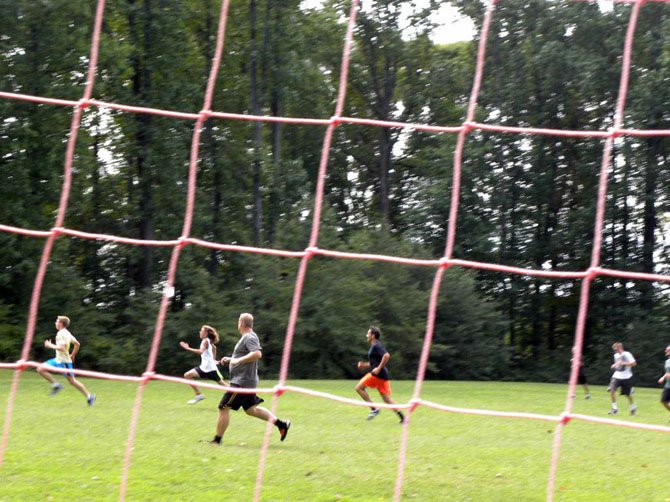 “There’s a lot of opportunities to get down field and score and kick through the goal post,” said Michael McCarthy. Photo by Abigail Constantino/The Connection

“What sport are they playing? It’s not soccer,” said a park visitor, watching people use their hands to throw and bounce a soccer ball on an open field, on Sunday, Sept. 7 at Providence Park in Fairfax. 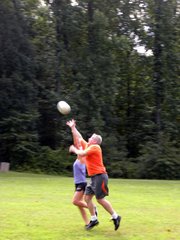 Jason Wakeman of the Grim-Mickey’s FC Club catches the ball during practice on Sunday, Sept. 7 at Providence Park in Fairfax.

The similarities to different sports are apparent in the skills required of the game. The ball can be served, as in volleyball. It can be kicked, as in soccer, rugby and football. It can even be dribbled, like in basketball. But unlike soccer, hands can be used. Unlike rugby and football, tackling is not allowed.

McCarthy got involved with the sport while attending an Irish festival last year. “I’d seen it on TV a lot but never really paid much attention to it even though I’m Irish,” he said. He was leaning against a tree when a team playing Gaelic football invited him to play. “It’s a very welcoming game. Anybody who wants to come out to play can play,” he said.

He started the Grim-Mickey’s FC, along with friend Greg Grimes, because he knew a lot of people in Fairfax who wanted to play. “Sure enough, a lot of people show up,” to practice, he said.

Jillian Stringer, of Arlington, learned about the game last year through McCarthy, who works with her at Modern Luxury magazine. “I was terrified that I was going to make a fool of myself. But they’re all really nice,” she said. McCarthy assured her that the game would come naturally to her because she played soccer.

He recruited a lot of the players who came to practice on Sunday. Igal Svet, of Washington, D.C., met McCarthy at a party and was recruited after he remembered an editorial on Gaelic football McCarthy wrote for Modern Luxury. He also played soccer.

THIS HYBRID of basketball, soccer, football, volleyball and rugby involves a lot of different skills. “It’s just weird putting them together” at first, said Svet.

Steve Tombres played last spring and said that the best part of the game is the exercise. “Instead of just running, it’s just a hard cardiovascular workout.”

The Grim-Mickey’s FC will have its first match on Saturday, Sept. 13 at the Irish Folk Festival in Fairfax against Michael Collins Gaelic Football Club of Alexandria. The team practices on Sundays at 10 a.m. at Providence Park in Fairfax.

GAELIC football has been hailed as Ireland’s most popular sport. At the 2013 All-Ireland Senior Football Championship Final between Dublin and Mayo, attendance reached almost 83,000, which equals that of the 2014 Super Bowl.

The game is played on a pitch measuring 145 meters long and 90 meters wide. On each end of the field are goals similar to soccer goals but with posts on each side. Players can score by kicking the ball into the goal for three points or between the goal post for one point.

There are 15 players on each team--a goalkeeper, three players in the back, three half-backs, two midfielders, three half-forwards, and three forwards.

For more information about how to play the Gaelic football, visit the Gaelic Athletic Association’s page at http://www.gaa.ie/about-the-gaa/our-games/football/.