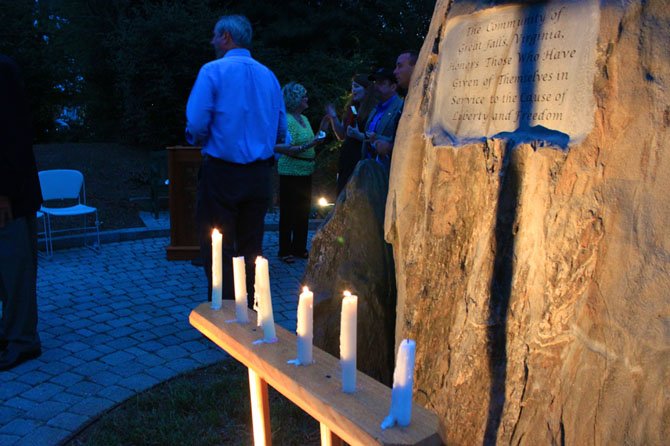 The candles lit after the Great Falls 9/11 Memorial Ceremony. Photo by Reena Singh.

Still 13 years later, it is a date no American can forget.

The annual Great Falls 9/11 Memorial Ceremony was held on Thursday at the Freedom Memorial to remember the six village citizens who died when a plane hit the Pentagon more than a decade ago.

“Those citizens that were all salt of the earth people who helped make the community what it is today,” said Fairfax County Fire Department Chief Richard Bowers, Jr.

Bowers was at the Pentagon after the attack, helping to put out the fire on the roof with the Montgomery County Fire Department.

“It is that moment in time that would be forever encapsulated in our memory,” he said in his speech to an audience of about 50 area residents. 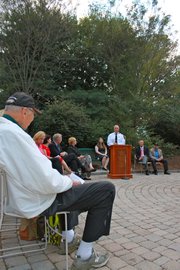 The ceremony included a presentation of the colors by the Marine Corps Color Guard, a reading of the names of the citizens who died in the Pentagon and candles lit in their memory in front of the stone Freedom Memorial.

Boy Scout Troop 55 helped to light candles among the audience and lead the Pledge of Allegiance.

Bowers’ speech, while honoring those who died in the attack, focused on those who served that day to make sure others could survive. He also recognized the amount of work that government agencies and everyday people do to be ready in case there is another attack.

“We now have a more critical eye for what happens around us,” he said. “Since 9/11, public safety has become an even higher part of us.”

He warned that they should not let their guard down in order to protect today’s youngest generations.

“I can say that all those who served on 9/11, we were with all those who were lost,” he said. “The great thing is that we are with them today.”

After the memorial service, he remembered a scene that many were fleeing that day.

“It was really eerie,” he said. “I remember everyone else heading out of D.C. while I was heading in.”

While he and many other firefighters were on the roof fighting the flames, they heard a rumor that another hijacked plane was headed for D.C.

“We were basically stuck on the roof with 60 firefighters and no aerial ladder,” he said. “It turned out to be a false alarm, thank goodness.”

Resident Sandy Pidgeon was at Johns Hopkins University for a meeting with his active duty Seal delivery team.

“One of my neighbors from when I was a kid was in one of the towers,” he said. “All our worst fears were realized. We had become complacent. Freedom is never free.”

Michael and Sherry Abramson, residents, knew some of those who died in the Pentagon by name. Michael, who had a client in one of the World Trade Center twin towers, almost had his own close call. He spent a significant amount of time in the 61st floor of the second tower that was struck in the weeks before the attack.

“Thank God I wasn’t up there that day,” he said. “It was unbelievable.”