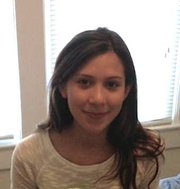 Twenty-year-old Justine Stayman, a computer science major attending the University of Maryland’s Honors Program, was thrilled to be selected for the highly-competitive Hinman CEO program – the nation’s first living-learning entrepreneurship program. She was looking forward to living on the UM campus with other students who had a passion for launching their own businesses.

However, her plans were suddenly dashed when a disease called Interstitial Cystitis (IC) forced her to move back to her Potomac home and take at least a semester off from her college studies – a devastating side-effect of her disease. She is in pain much of the time, has difficulty sleeping, has pared her diet down to the same seven foods every day, cannot walk any distance at all, swim or participate in physical activity – and is unable to leave her home for a long period of time.

“IC is definitely a disease that not only affects you every day, but it becomes your entire life,” she said. Her life as she knew it has been disturbingly altered and disappointedly changed.

Interstitial Cystitus (IC) affects 4 – 12 million men, women and children in the US (1 in every 26) and there is no known cure, diagnostic tools available for clinicians or effective treatments. Also known as painful bladder syndrome (PBS), Bladder Pain Syndrome (BPS) and Chronic Pelvic Pain (CPP), IC is a condition that consists of recurring pelvic pain, pressure, or discomfort in the bladder and pelvic region, often associated with urinary frequency and urgency. According to the Harvard Health Publication, “IC can result in a quality of life comparable to that of a patient with rheumatoid arthritis, chronic cancer pain, or a patient on kidney dialysis.”

Physicians do not know what causes IC – and many find it difficult to diagnose. When Stayman felt the urge to urinate frequently, she visited the UM Medical Clinic to see if she had a Urinary Tract Infection (UTI) but when the tests came back, she was told there was no infection. However, the symptoms continued, and the next time she saw a doctor, she was given antibiotics because her white blood cell count was low. However, when the antibiotics kicked in, she felt an unbearable burning in her bladder. She continued to see a variety of doctors and finally visited an urologist who diagnosed her IC. Since then, she has tried a combination of medicines and changes in diet and lifestyle – but with very limited improvement in her symptoms which include debilitating chronic pain, bladder ulcerations, bleeding, painful intercourse, urinary frequency (needing to go often, up to 60 times a day in severe cases), and urinary urgency (feeling a strong need to go suddenly).

Stayman asked her urologist, “What’s the chance there will be a cure in my lifetime?” “Don’t get your hopes up,” was his answer. “The best treatment does not exist – we have to get more funding and more awareness – that’s the problem.”

Stayman has decided not to sit on the side-lines, but to become an activist to raise awareness and money for research for the disease. “I decided to do something for everyone else with this disease,” she said. She started a petition to request the support of U.S. Senators Barbara Mikulski and Harry Reid to sponsor and pass a bill for increased research funding for IC in the following areas: $32 billion for the National Institutes of Health, with a focus on expanding the interstitial cystitis research portfolio, $660,000 for the IC Education and Awareness Program at the Centers for Disease Control and the funding and re-opening of the University of Maryland Interstitial Cystitis Research Center which was closed in 2009 due to lack of funding.

“In 2004, a breakthrough was made by the doctors at the Interstitial Cystitis Research Center at the University of Maryland (one of the only research centers of its kind) and they discovered a protein, named Antiproliferative Factors (APF), uniquely present in the bladders of IC patients which prevented the bladder from repairing damage to its own tissues (the source of IC symptoms),” she said.

After its closing, no further research has been done with regards to suppressing the APF’s effects despite the Research Center’s note that “greater understanding of APF's mechanism of action could aid in the diagnoses and treatment of interstitial cystitis.” Stayman’s petition has already collected more than 2,000 signatures.

California’s Dr. Elliot Lander is investigating stem cell research, and the Interstitial Cystitis Research Center is researching other possible treatments, but each program is severely underfunded.

“Another exciting and very promising research project is at the National Institute of Diabetes and Digestive and Kidney Diseases (NIDDK) of the National Institutes of Health (NIH),” Jill Osborne, IC Network founder said. “The NIDDK’s Multidisciplinary Approach to the Study of Chronic Pelvic Pain (MAPP) Research Network embraces a systemic — or whole-body — approach in the study of IC/PBS and CP/CPPS. In addition to moving beyond traditional bladder- and prostate-specific research directions, MAPP Network scientists are investigating potential relationships between these two urological syndromes and other chronic conditions that are sometimes seen in IC/PBS and CP/CPPS patients, such as irritable bowel syndrome, fibromyalgia, and chronic fatigue syndrome. The multidisciplinary (i.e., scientists employing a variety of research approaches) MAPP Network includes researchers with clinical, epidemiological, and basic research expertise, all working collaboratively.”

Right now there is a six-step treatment program that one can follow once there is a diagnosis. “It’s important to be certain that it is identified early – and correctly,” said Osborne. “So often, doctors want to think the patient has a UTI and they prescribe antibiotics without ever doing a urine culture. If the culture comes back stating there is no infection, then the doctor needs to use the correct diagnostic tools to identify IC and to start treating it. The earlier it is identified, the more effective the treatment will be.”

“If anyone has the symptoms of IC, they need to seek urologists who specialize in IC and related diseases,” said Osborne. “The importance of September being IC Awareness month is to bring awareness to the public about IC and the need for more research funding.”

Stayman has begun her own campaign to gather signatures to make Congress aware of the need for funding – and of the many Americans who have this disease. “Some may not even be aware of the symptoms. Others may not be able to afford the medicines. This disease causes many to be on permanent disability, and is truly debilitating. It’s time that more people know and understand the disease - and that we find new treatments and a cure,” she said.

Here is the link to Stayman’s petition and the letter she included. She is hoping that others will understand the dire need for the petition and will sign it: