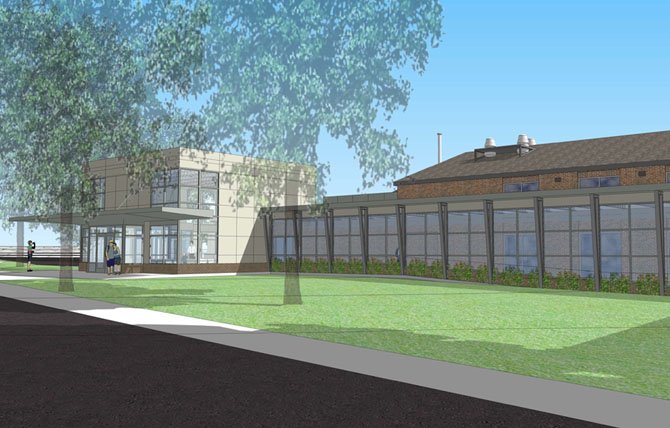 When the Vienna Community Center greets the public in April 2016, it’ll be larger and more modern than the current facility and will boast a new, regulation-sized gym. But getting from here to there takes money.

A December 2013 bond issue is funding most of the work; and during a Sept. 15 work session of the Vienna Town Council, Parks and Recreation Director Cathy Salgado gave an update of the project’s approximate financial picture.

“People really want this and we’ve been getting nothing but good comments about it. They like the lobby and the glass and keeping the brick on the inside.”

“We’ve broken it down into three sections,” she said. “Renovation of the existing building is $2.542 million, the site-work subtotal is $1.402 million and new construction – the new gym plus restrooms – is $2.4 million.” Salgado also said a 3.82-percent construction-cost escalation rate is predicted between now and next year, which equals $97,000.

When all the work is done, the Community Center will have two main entrances in the northeast corner of the building, leading into a new, 900-square-foot lobby. The current lobby would be transformed into new, administrative-office space.

People will enter the building from both Cherry and Mill streets so they may use both nearby parking lots. A glass corridor will run along the north wall of the existing building and connect the new gym with the new lobby.

A new, 9,115-square-foot, high-school-sized gym will be constructed to the west side of the existing building. It’ll be 35 feet high and will contain bleachers and two, 4-feet-wide walking/running tracks (with two lanes) around the perimeter. It’ll be striped for basketball, volleyball and badminton courts, and will have two electronic scoreboards.

THE TOTAL ADDITION to the Community Center’s north and west sides will be 13,888 square feet and will also allow space for future expansion. The entrance to the existing gym will be via a T-shaped corridor going to it and also to the lobby. The second-floor will receive a new electrical system and revamped classroom space.

Noting that the entry, lobby area and corridor will cost $711,313, Salgado said, “This could all be done in Phase One because it doesn’t require additional parking. But we need all the site work done before work on the new gym can begin. So we need to get that building renovation going, get it on track and get it ready for the future.”

She said the site-work total is about $1 million larger than its original feasibility estimate because “we’re moving a stormwater-detention vault and putting in a much larger one in front of the community center parking lot.”

Regarding the building renovation, Salgado said it costs so much because “we’re tearing out all seven of the electrical, mechanical and plumbing systems and totally replacing them with new ones. We’ll have LEED Silver certification, plus we’re going to be able to heat and cool different parts of the building at the same time.”

She said the HVAC and mechanical systems’ cost, alone, will be more than $1.5 million, and it’ll cost about $500,000 to relocate part of the W&OD Trail and implement the associated changes to make it safer. “The trail is 18 feet wide, with separated pedestrian and bike lanes,” said Salgado. “We’re adding an S curve at Park Street for safety, and possible enhanced signal devices there.”

She also listed some portions of the community-center project for which the Town Council may apply for particular grants to help with the funding. But she said the grants only cover parts of certain things.

Since Vienna Youth Inc. (VYI) teams would use the new gym heavily, Salgado said the organization is expected to donate between $500,000 and $1 million to the Town for the project. But with a budget of $4 million and a total project cost that’s continued to escalate, she said the funding deficit now stands at $2 million.

“If we had a discussion about [increasing] the meals tax, it could close that gap,” said Councilman Howard Springsteen. Vienna’s current meals tax is 3 percent, and Town Manager Mercury Payton said a 1-percent increase would yield an extra $700,000. So within four years, said Payton, such a hike would equal $2.8 million.

Therefore, said Springsteen, “A meals tax [increase] is a viable option. I think we have to look at [it] as a realistic, revenue source.”

Meanwhile, said Salgado, “We have the money to do the renovation and the entry, lobby and corridor, plus the HVAC work and [new] roof. We’re recommending we go out to bid and [see how much we can fund].”

THE PROJECT goes before the Planning Commission on Oct. 22 and, so far, said Salgado, “People really want this and we’ve been getting nothing but good comments about it. They like the lobby and the glass and keeping the brick on the inside.”

The project’s scheduled to go out for bids in January. Salgado said she could check to see if any other funding sources could help the Town pay for it, and Mayor Laurie DiRocco gave her the go-ahead to do so.