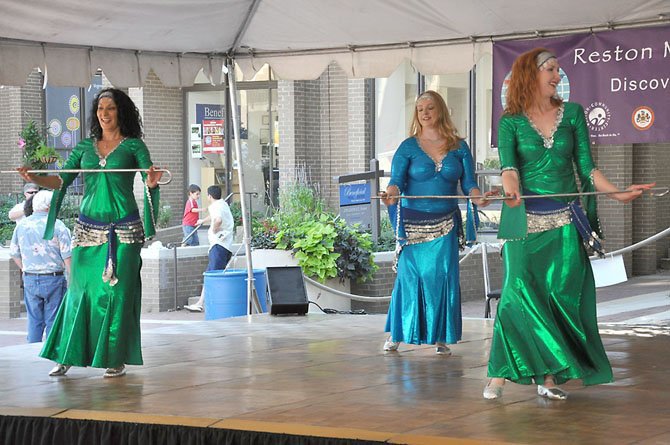 Members of Troupe Eshveh, a Sterling-based dance ensemble specializing in Middle Eastern dance, perform on the world stage at a past Reston Multicultural Festival. Photo by Alex McVeigh.

Reston residents will be able to travel the globe in their own backyard this weekend.

The 14th annual Reston Multicultural Festival will bring the community’s founding principle - to be open to all - to Lake Anne Plaza on Saturday, Sept. 27 from 11 a.m. to 6 p.m. for a celebration of culture.

“What is unique about this festival is the core mission to reflect a mosaic of cultures and ethnic origins that is a reflection of the many different national origins of the Reston population,” said Reston Community Center Director of Communications Bebe Nguyen. “According to the South Lakes High School website, 95 countries are represented at the school and 62 languages are spoken.”

She said similar statistics are found at other area schools.

The festival will feature dance and music performances throughout the day. Last year, about 4,000 visitors came to see the performances, dress in their native clothing and experience the other cultures that make Reston their home.

An arts and crafts center will teach children to make their own origami paper cranes, friendship bracelets and sushi plate suns, among other activities.

“The performances and the food are both extremely popular,” said Nguyen. “The hands on activities for children of all ages are always very busy. The henna tattoos done by the Al Fatih Academy also have very long lines. And of course, from an emotional perspective, nothing more movingly reflects the Festival spirit than the Naturalization Ceremony that kicks it off.”

Approximately 25 people will participate in this year’s naturalization ceremony at the beginning of the festival to become a citizen of the U.S.

Nguyen said the countries they represent will not be known until a few days before the festival.