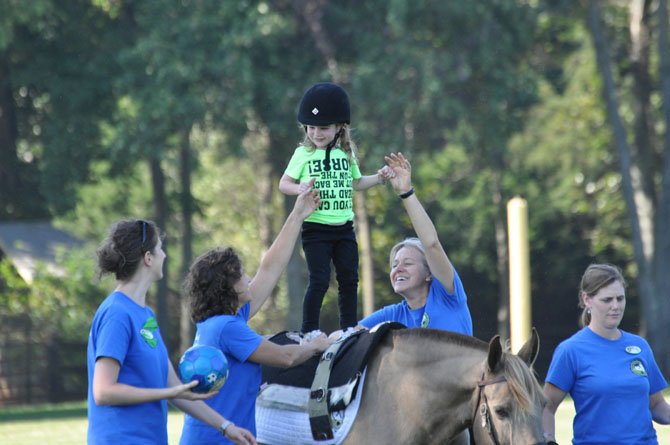 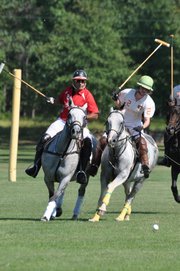 At 3 years old, Blythe Champion was diagnosed with herpes encephalitis, a rare and aggressive central nervous system infection. The infection put her into a coma; when she woke up, she was blind. Eventually Champion regained her central vision, but never peripheral.

The Centreville resident suffered permanent brain damage that impairs her ability to judge anything spatial -- what is up, down, left, right. Walking and navigating space are difficult, and driving is out of the question for Champion, now 27. But she started riding horses 16 years ago, working with a side-walker and a leader.

Gradually Champion achieved more independence on the horse, developing the ability to walk the animal by herself. Next came trotting. Then cantering. And cantering fast.

Champion attends weekly 45-minute lessons at the Northern Virginia Therapeutic Riding Program (NVTRP) in Clifton. Her instructor is also the program’s executive director, Kelsey Gallagher. “She’ll stand in the middle of the ring and tell me where to go,” said Champion. “I’m moving the horse, she’s saying left, straight, a lot of left.”

Not only is Champion a rider with the NVTRP, but she also volunteers to secure donations for the program’s biggest annual fundraiser: the Ride to Thrive Polo Classic. The latest edition drew roughly 270 bow-tie- and sundress-sporting supporters to Chetwood Park in The Plains, Va. on Saturday, Sept. 20.

PRIOR TO THE MAIN EVENT, attendees were treated to appetizers, a children’s craft station, 50/50 raffle and a carriage demonstration by the Piedmont Driving Club of Northern Virginia. There was a presentation of colors by the St. Andrews Society of Washington, D.C. and NVTRP Military Riders Dylan Arthur and Jonathan Alsum.

After a primer on the rules and techniques used in playing polo, the four-period match (periods are called chukkas or “chukkers”) between Los Tigres and Guarisco Gallery got underway. Players came from around Virginia, and as far away as Argentina.

For the uninitiated, each team consists of four mounted players who attempt to use long mallets to drive a small white ball into the opposing team’s goal. The seven-minute chukkers are a fast-paced flurry of stomping hooves, swinging mallets and rapidfire changes in possession.

“I tend to equate it to hockey on horseback,” said NVTRP executive director Kelsey Gallagher. “It’s a little rough, fast and fun to watch. There’s not a lot of down time.”

Los Tigres rider and Saturday’s game-winning MVP Debbie Nash said managing a large animal moving at speeds up to 30 miles per hour while trying to both hold on and swing a mallet accurately requires a high level of fitness.

“Trying to put it all together, it’s like playing golf in an earthquake.”

Between each of the chukkers, each rider exchanged for a fresh mount. NVTRP used the time to run auctions and make special presentations. During one break they brought out 3-year-old Alyssa Peterson, who was born with a defect called agenesis of the corpus callosum.

Peterson is missing the tissue connecting the two halves of her brain, and used to favor one side so much she would walk in circles. When she found more traditional therapy difficult and painful, Peterson’s parents brought her to NVTRP. She received “hippotherapy,” where a trained therapist uses the horse movement as a tool for treatment.

“THE HORSE’S pelvis gives that rotational movement -- right hip then left hip goes forward,” said Gallagher. “Nothing can be replicated by a machine. Also the warmth of the horse softens a rider’s muscles, creates muscle memory, strength and balance.”

Peterson’s skills improved dramatically with the therapy, and Saturday she demonstrated her ability to stand upright and stationary on the horse.

“People loved her,” said Gallagher. “They were crying -- men were crying -- watching her and what she’s accomplished. She really showed the guests there what this is all about, why it matters and what it really does for people.”

“When people see that, it makes them want to give more, help more, any way they can,” said Nash. As of press time, Gallagher called the event “a huge success” but is still tallying the total funds raised. Two of the major event sponsors were AT&T and Divot Charities.

Champion and Peterson are just two examples of the spectrum of mental and physical disabilities to which Gallagher and the NVTRP cater.

“I’ve seen it affect other riders,” said Champion, who also loves the program’s ability to help wounded veterans. “So many who have PTSD, and they can escape from that pain that they’re going through. They have this smile on their face and you can tell that things are changing.”