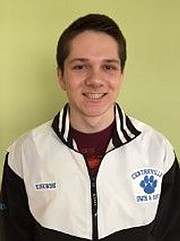 Has Five Qualify for State Finals

The Centreville swim and dive team had five athletes qualify for state finals in Richmond.

Logan Ross, Sarah Hessler and Terry Jung all competed in the 100 breast. Ross finished 10th in the State.

Tyler Kurowski represented Centreville in the diving competition and finished 12th in the State.

The Centreville boys’ lacrosse team took part in the Woodgrove tournament in Purcellville over spring break, winning all three of its games to bring its season record to 4-1.

The tournament wins came against Edison, West Springfield, and Stonewall Jackson between March 28 and April 1, with scores of 14-8, 18-10, and 13-5. Centreville’s top scorer for the tournament games was John Tarver with 12 goals, and its assist leader was Tyler Heidt with eight.

The Wildcats have demonstrated unselfish play this season, recording assists on almost two thirds of their goals and already surpassing the team’s assist total from 2014. Centreville is looking forward to the rest of their 2015 season under the direction of head coach Jed Williams.

The Chantilly baseball team will host McLean at 6:30 p.m. on Wednesday, April 8 in a rematch of last season’s 6A North region championship game.

The Chargers captured the 2014 region title with a 12-0 victory. The Chargers advanced to the state final, where they lost to Western Branch, 6-4.

The Bulldogs defeated Hilton Head 19-1 on March 30. Westfield also has wins against Stone Bridge and Herndon.