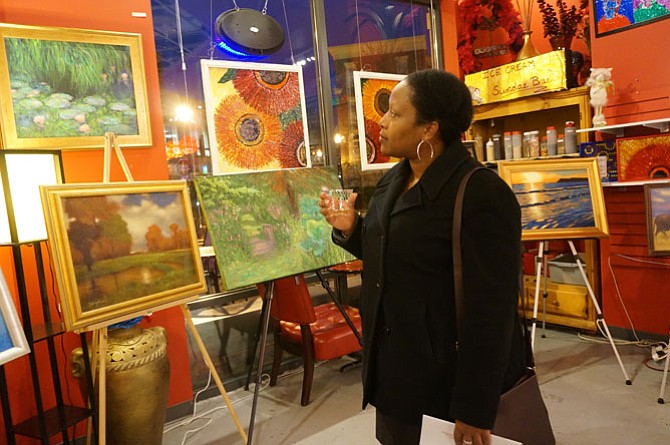 Anita McFadden of Fairfax browses the artwork during the Breath of Spring reception March 19 at Artfully Chocolate. Photo by John Bordner

Artist Eric Nelson, right, talks with collector Anita McFadden during the Breath of Spring reception March 19 at Artfully Chocolate. Nelson and Nancy Ziegler showcased their artwork as part of a celebration of the official end of winter. 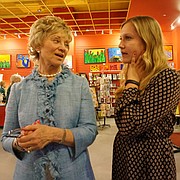 When Nancy Ziegler’s husband died in 2006, a friend gave her a gift certificate to be used at The Art League. It was there that she discovered her artistic talents and has been a flourishing artist ever since.

“I played the piano and studied voice so I had some creative blood in me,” Ziegler said. “But I had always wanted to paint. I just never pursued it until my husband passed away.”

Ziegler, whose work can be seen at the Vander Zee Gallery in Old Town, joined forces with fellow artist Eric Nelson to host A Breath of Spring reception March 19 to celebrate the end of winter.

Held at Artfully Chocolate in Carlyle, Ziegler and Nelson exhibited dozens of pieces of their work in a joint showing that drew collectors from across Northern Virginia.

“Eric’s work is so bold,” said Anita McFadden of Fairfax. “The contrast of primary colors he uses is so interesting.”

Unlike Ziegler, Nelson has kept sketchbooks at his side since he was a teenager. But it wasn’t until 2006 that he “jumped off the cliff,” leaving the corporate world to pursue his artistry full time.

“It still took a long time for me to describe myself as an artist,” Nelson said. “It seemed a bit presumptive. That changed the first time someone bought one of my pieces.”

Ziegler, who specializes in oil on canvas landscapes, is also a fan of Nelson’s work.

“Eric’s work is so unique,” Ziegler said. “He is such a happy artist. Everything he does makes you smile.”

Along with Artfully Chocolate co-owner Edward Hart, Ziegler and Nelson conceived the idea for the reception as a way to welcome the long-awaited change of seasons.

“The winter weather had been so dreary,” Nelson said. “It was time to wake up and get out of hibernation.”