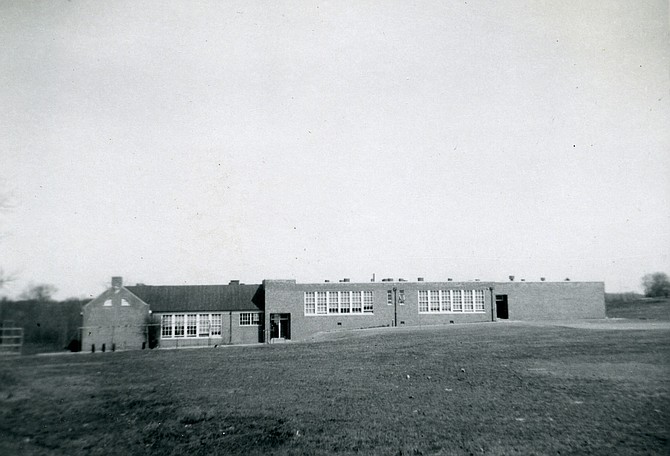 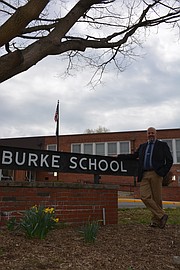 Burke School Principal Frank A Tranfa, Jr (right) looks forward to reconnecting the community with the school’s past and present at an anniversary event on April 23.

The Burke School is turning 75. The building at the corner of Burke Lake and Lee Chapel Roads, dedicated in 1940, was built to accommodate the student population overflowing older three-room schoolhouse that was first built in 1912. The new school project benefited from the Works Progress Administration under President Franklin Delano Roosevelt’s “New Deal.”

Fowler Neal will be among those speaking on April 23 at the Burke School in celebration of the institution’s 75th anniversary. She’ll be joined by Burke Historical Society president Jon Vrana as Silas Burke himself.

In addition to the talks there will be a video presentation and a fashion show with current students modeling clothing representative of the 1940s, according to current Burke School librarian Sandy Mathews who is organizing the event.

Mary Lipsey, a Fairfax County History Commissioner and member of the Burke Historical Society, lived in Burke for 12 years and now lives in Springfield.

“The school, no matter which building it’s in, is the heart of the community,” she said, “from fundraising activities, spelling bees, performances, it’s not just the kids who have enjoyed it.”

"Burke was a small, rural community when I was growing up. Kids and parents knew one another and worked together in the community, at church. Every class had room mothers that had parties for us.

The maypole was always fun. There was a big pole in the playground with crepe paper streamers on it, lots of them, and while music played, we danced around the maypole intertwining the ribbons. Then we had a party afterwards.

We loved our school. We had one teacher and the kids I met in the first grade were grades two through seven. My seventh grade year was the first time we had a cafeteria. Mrs. Sisson and Mrs. Dove provided wonderful homemade lunches for $1.25 a week.

Along with reading, writing (“cursive” was a big thing and we practiced and were graded as we improved our skills) [lessons included] values: to be honest, trustworthy and to look out for one another."

Currently, the school is a special education center, serving around 130 sixth, seventh and eighth grade students from across the county, plus 30 elementary-age students in an Alternative Learning Center.

“I’ve seen how the school has changed people,” said Principal Frank A. Tranfa, Jr. “The staff is family, the school is family. Just being here seven months, it’s easy to see it’s a special place.”

The population is somewhat transient, said Tranfa, with students coming and going from their base schools as needed. The school supports persons with mental and or physical disabilities, language challenges or difficult family or economic situations.

Tranfa started at Burke School last September. He was previously a teacher and assistant principal at Chantilly High School.

The Burke School is located at 9645 Burke Lake Road in Burke. The historical program is scheduled to run from 10 to 11 a.m. on April 23, with a reception following until 12 p.m.