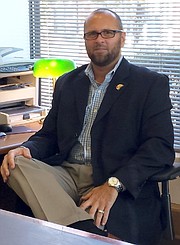 Mario DiPatrizio was recently named postmaster of Alexandria. DiPatrizio, a postal employee of more than 23 years, replaces John Brodbeck who has moved to a new position in Baltimore.

DiPatrizio began his career as a letter carrier in Doylestown, Pa., in 1992. Soon after, he was promoted to an entry-level management position in Phoenixville, Pa. His success as a manager led to a series of postmaster promotions with increasing responsibility across three postal districts.

Most recently DiPatrizio served as senior manager, Post Office Operations in the Central Pennsylvania and Northern Virginia districts where he provided oversight for thousands of postal employees.

In February, DiPatrizio achieved a career-long goal by becoming Alexandria’s 35th postmaster. “I am very excited to serve as postmaster for the City of Alexandria and look forward to providing Alexandria residents with efficient, dependable service,” said DiPatrizio.

In his new position, DiPatrizio oversees 510 employees engaged in retail, delivery and support operations. There are 256 routes in Alexandria with 152,269 delivery points.

A swearing in ceremony is scheduled for Tuesday April 21 at the Masonic Memorial Temple located at 101 Callahan Drive, Alexandria.