Potomac Sports Briefs for the Week of April 22, 2015
Votes 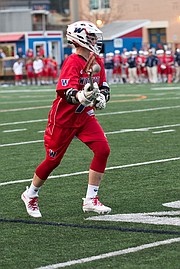 Joseph Montesano and the Wotton boys’ lacrosse team will face Churchill on April 23 in a matchup of county rivals. 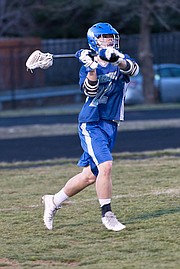 Marshall Rhodes and the Churchill boys’ lacrosse team are off to a 10-0 start.

Churchill, Wootton To Face Off Thursday

The undefeated Churchill and Wootton boys’ lacrosse teams will face one another at 7 p.m. on Thursday, April 23 at Churchill High School.

The Churchill Bulldogs are off to a 10-0 start, including a 17-8 win over Poolesville on Saturday. Nine of Churchill’s 10 wins have come by a margin of at least nine goals.

The Wootton Patriots were 6-0 entering Tuesday’s game against Bethesda-Chevy Chase, including a 13-5 win against Walter Johnson on April 17. Wootton traveled to Sherwood on April 14 and edged the Warriors 12-11.

The Whitman baseball team will travel to face Wootton at 3:30 p.m. onWednesday, April 22.

Whitman pitcher Sam Berson earned the win against WJ, allowing one run on two hits over six innings while walking one and striking out seven.

Eric Wayman went 4-for-4 with two runs and an RBI for Whitman. Sean Cook and Danny Mills each had two hits.

Wootton is 2-6, including a 10-3 loss to Quince Orchard on Saturday.

The Churchill softball team won six of its first seven games and entered this week with a 6-3 record.

The Bulldogs have scored double digit runs in each of their six victories.

Churchill will host Poolesville at 3:30 p.m. on Wednesday, April 22.