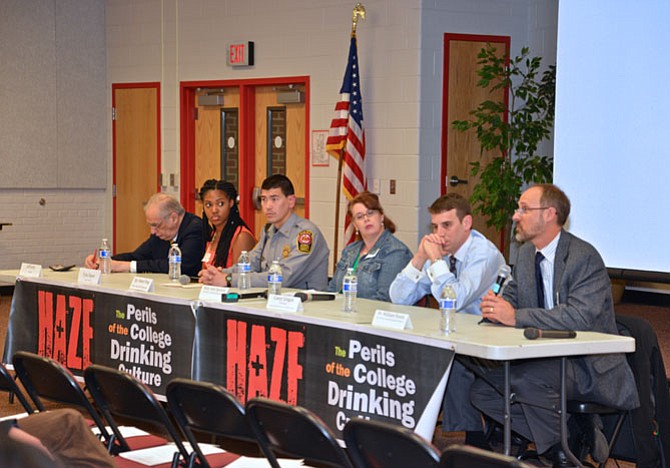 The final quarter of the 2014-2015 school year has arrived. For thousands of area high school seniors that means time to say farewells to friends, teachers, and the familiarity of the routines and activities of the past four years. For many of them, it also means time to prepare for that first year of college, and possibly their first time away from home and daily parental guidance. On April 14, the United Prevention Coalition of Fairfax County (UPC) presented one of their signature programs, “The Perils of the College Drinking Culture,” at Madison High School in Vienna to help both the young adults and their parents make a safe and healthy transition to this next phase in their lives. The documentary “HAZE,” was shown, melding a mixture of medical facts about the effects of alcohol with expert commentary from doctors, scientists, and school administrators. The thread that wove the film together was the tragic real-life story of Lynn Gordon Bailey, Jr. known by all as simply “Gordie.”

Adults and youngsters alike could be seen leaning forward toward the screen as Gordie’s story unfolded before them. An excellent student and gifted athlete involved in a variety of academic and social activities, on Sept. 17, 2004, Gordie was found dead by his new fraternity brothers at Chi Psi Fraternity House at the University of Colorado at Boulder. The night before, Gordie and 26 other fraternity pledges had been taken blindfolded to a National Forest where they were encouraged to drink four 1.75 litre bottles of whiskey and six bottles of wine in 30 minutes. When the group returned to the Fraternity house, Gordie was intoxicated and did not drink further. After placing him on a couch and then writing on his face and body with markers in another fraternity ritual, they left Gordie to “sleep it off.” Ten hours later he was found dead, face down on the floor.

Interviews with Gordie’s family highlighted their grief, but the warning in the story was their mutual shock and disbelief. Mother, father, family and friends all echoed, “How could this have happened, especially to him?” Gordie Bailey had been a happy, healthy, friendly, outgoing young man. He had no prior history of any kind of substance abuse. No mental health issues. He came from a stable home with strong and loving relationships. Yet, just three weeks after arriving on campus, Gordie was gone.

ATTENDING with his mother, Brenda, William Parada found the program “breaks down your perceptions. It really shows you the effects and the consequences.”

The agenda included a welcome by Madison PTSA President Jill Hecht. Sara Freund, executive director of UPC, set the stage, outlining the agenda, and following the showing of “HAZE,” Lisa Adler, president of UPC, introduced a panel and facilitated a question and answer session after each member gave a brief summary of their credentials and some thoughts on the movie and the topic under discussion. The panel represented a depth of knowledge and personal experience, including Dr. William Hauda, M.D. an emergency physician and medical director of the Forensic Assessment Consultation Team at Inova Fairfax Hospital. Hauda described in detail the effects of alcohol on the brain and on the body. “First there is the animated stage. Then the alcohol begins to diffuse around the body.” Alcohol affects the part of the brain that controls basic bodily functions, slowing down all reflexes and functions, even breathing. “It’s scary,” said Hauda. “It looks like a person is simply sleeping, when they could be going into a coma, and dying.”

Tylia Turner, a sophomore at George Mason University spoke about the pressures faced by college students, then offered tips and alternatives. “There are lots of activities, things to do on and off-campus that don’t involve drinking,” she said. “It’s true,” added panellist Casey Lingen, chief deputy, Commonwealth’s Attorney for Fairfax County. “I made a decision not to drink at all when I went to college, and I still had a lot of fun. That first ‘No,’ is the hardest, but after awhile, people just accepted it. And since I usually had a cup in hand – filled with diet soda or whatever – it wasn’t really an issue. Remember, the drinking may come from peer pressure, but the consequences are all yours.”

The panelists all agreed with a central message of the film. If someone had just checked on young Gordie and made a call for help, he would probably have survived. Several of them, however, like Dan Pang, Fairfax County Police Department Sergeant and School Resource Office Supervisor, warned that in the long run, “it’s really about personal responsibility.” Pang and others advocated for “doing the right thing. Looking out for others and not being afraid to make the call.”

“You can save others that way,” said Jeff Levy, president of Virginia College Parents, whose son died in a car crash after drinking at a college party. The panelists were unanimous, however, in their belief that it was more important to abstain, not getting into situations where safety is dependent on the care and awareness of others who more than likely were equally under the influence of alcohol or drugs and incapable of providing assistance.

THE GROUP also agreed with advice from Mary Ann Sprouse, director, George Mason University’s Wellness, Alcohol and Violence Education and Services. “Have a plan,” she said. “Know what you are going to do, and know what your response will be when you are faced with these situations. Making it up as you go can lead you to do something that you really shouldn’t or don’t even want to do.”

“And don’t count on those friends who say that you’ll all stick together at a party,” warned Pang. “That never happens. Trust your sixth sense, before it’s dulled by alcohol.”

The takeaway from the program that the panelists and the UPC members stressed for the parents was, in Mary Ann Sprouse’s words, “to use your voice.” Staying involved and communicating, especially when the student has left the home environment, is critical.

UPC is a non-profit organization working to prevent substance abuse by youth and young adults. Collaborating with more than 60 community organizations and partners at the county, state and national levels, UPC addresses the problem with educational programs, advocacy, research, and work groups that include parents, teachers, health care personnel and the young people, from middle school and up, that they seek to protect. UPC offers a number of resources and guides, like its “Virginia’s Guide for Parents of First-Year College Students.” More information is available on their website www.unifiedpreventioncolaition.org. The website www.virginiacollegeparents.org will provide more information on that group’s efforts with resources for parents. For more about the movie “HAZE,” Gordie Bailey’s story and additional resources, visit gordie.org.