Potomac Sports Briefs for the Week of April 29, 2015
Votes 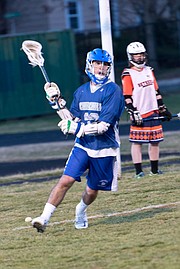 Louis Dubick, seen earlier this season, and the Churchill boys’ lacrosse team improved to 12-0 with wins over Wootton and Walter Johnson.

The Churchill boys’ lacrosse team extended its winning streak to 12 games with victories over Wootton (14-8, April 23) and Walter Johnson (16-5, April 25).

The Bulldogs faced Landon on Tuesday, after The Almanac’s deadline. Churchill entered the game with a 12-0 record and the No. 8 ranking in the Washington Post. Landon was 15-2 and ranked 1 in the Post.

The Bulldogs will close the regular season on the road against Quince Orchard (11-1) at 5 p.m. on Thursday, April 30.

Wootton entered Tuesday’s contest with Springbrook with a 6-5 record. The Patriots will host Oakton (Vienna, Va.) at 7 p.m. on Thursday, April 30.

The Whitman baseball team defeated Watkins Mill 10-0 in five innings on April 27, giving the Vikings four straight victories while improving their record to 9-5.

Whitman faced Blair on Tuesday, after The Almanac’s deadline.

The Vikings have three games remaining in the regular season, starting with a home game against Urbana at 4:30 p.m. on Friday, May 1. Whitman will host St. Albans at 2 p.m. on Saturday and will travel to face Clarksburg at 3:30 p.m. on May 5.