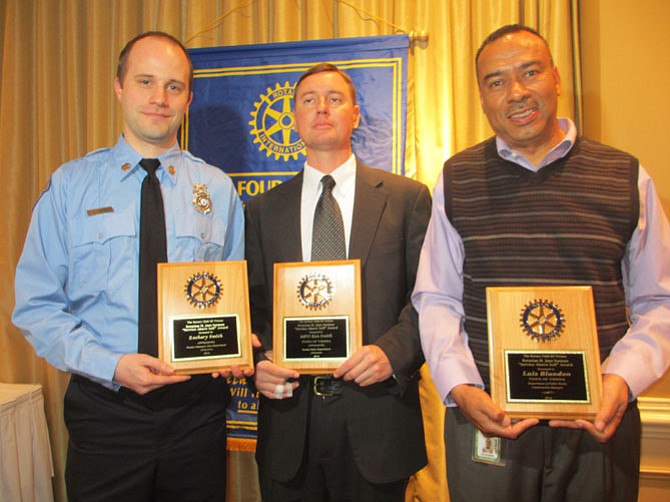 The Rotary Club of Vienna awarded 2014 Rotarian M. Jane Seeman "Service Above Self" awards to outstanding members of the Vienna Police Department, Vienna Volunteer Fire Department, and Town of Vienna staff on April 22. Each of the three recipients received a personalized inscribed plaque and his department received an updated perpetual plaque commemorating the latest award. The police department and the fire department were given checks, as well.

Zach Smith has put in more than 350 volunteer hours during his four-year tenure with VVFD. He is a firefighter and EMT, an ambulance driver and officer, and runs the recruitment center, screening applicants to the volunteer fire department.

Narcotics detective MPO Ken Smith was recognized for his contributions to the Vienna community and his background as undercover officer for Fairfax County. In the Vienna department, he is a squad leader and mentor to newer police officers. Ken Smith has 11 years of police work.

Public Works supervisor Luis Blandon was nominated and recognized by his department for his community outreach. Public Works director Dennis Johnson called Blandon the “on-site go-to” man. Whenever there is construction in a neighborhood, Blandon goes out to the community, talking to the residents, answering questions from them and keeping them informed of progress. 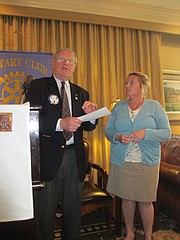 George Creed of the Rotary Club of Vienna presents a check to Cathy Salgado, on behalf of the Town of Vienna Parks and Recreation. The funds go toward recreation programs and restoration of the roof of the stage on the Town Green.

The Rotary Club gave out a substantial check to the Town of Vienna Department of Parks and Recreation. A portion of that money was dedicated to a new roof for the stage on the Town Green. Special thanks went out to Vienna developer Tommy Staats for his assistance with the execution of the project.

The funds that Rotary donated to the police department is earmarked for the department’s bicycle team for equipment. VVFD will apply the funding toward the purchase of equipment, as well. The morning of the awards program, VVFD took delivery of its new transport medic unit and went out on its first call the same morning. The truck cost the department $270,000.

Donations to community nonprofits in 2015 from 2014 ViVa! Vienna! proceeds equal approximately $180,000. ViVa! Vienna! returns to the Historic Church Street corridor Memorial Day weekend for the annual three-day festival featuring food, amusement rides, more than 300 vendors, and live entertainment. Net proceeds from ViVa! Vienna! are distributed back to the community throughout the following year.

To learn more about Rotary International or to join Vienna Rotary, go to Viennarotary.org.