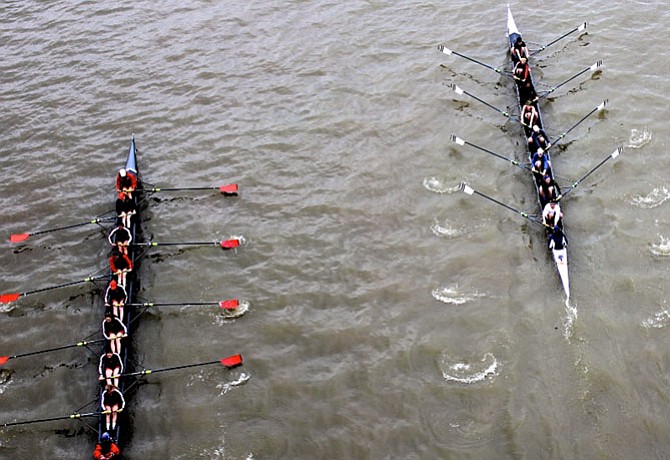 The T.C. Williams crew team brought its power to the Georgetown waterfront on April 25 to compete at the Charlie Butt Regatta. Racing against top boats from the region, the TC team won nine races, including top honors for the girls’ and boys’ first varsity boats.

The Titan boys’ first varsity 4 continued its winning streak, posting decisive victories in both the morning heat (5:04.9) and the afternoon final (4:38.2). In the final, the boys’ beat second-place competitor, West Potomac, by almost 10 seconds. Members of the boat include Angelo Leitner-Wise, Carter Weitekamp, Preston Tracy, Tyler Souza and Anthony Ponichtera (coxswain). The boys’ first 4 is guided by coach Pete Hearding.

The girls’ first varsity 8 powered down the 1,500-meter race course, winning its heat in 5:03.3 and the final in 4:40.2. The first 8 victory was especially sweet as it edged out McLean High School, which had narrowly defeated the Titans last week, by 3.3 seconds. Members of the first 8 include Brooke Teferra (coxswain), Maria Justiano, Claire Embrey, Katie Murphy, Reed Kenney, Amelia Bender, Maura Nakahata, Maeve Bradley and Kyra McClary. It is coached by Jaime Rubini.

In other victories, the girls’ freshman 8 boat won its heat in 5:16.4 and advanced to the final round. In an exciting finish, the Titan girls were edged out by .5 seconds by National Cathedral School, with a time of 4:33.0.

The freshman girls will be back in full force for next week’s state championship. The girls’ lightweight 8, racing in exhibition (outside of its normal category) won the second 8 category with a time of 5:11.8, followed closely by the Titan girls’ second 8 boat. The Titans second 8 captured second place in the final, with a time of 5:01.8, 3.4 seconds behind McLean High School. The boys’ freshman 8 also performed well, grabbing second place in its category. In addition, the girls’ fourth 8 captured second place honors.

The Charlie Butt Regatta honors the contributions of local coach Charles S. Butt, Jr. to rowing in the region. He got his start in 1949 as the first crew coach at Washington-Lee and guided the school for 41 years, including the period in the ‘50s and ‘60s when it was the dominant high school crew in the eastern U.S.

The T.C. Williams crew team competes next in the Virginia State Championships, which will be held over the next two weekends on the Occoquan Reservoir and kicks off with the Ted Phoenix Regatta for freshman and novice boats on May 2.